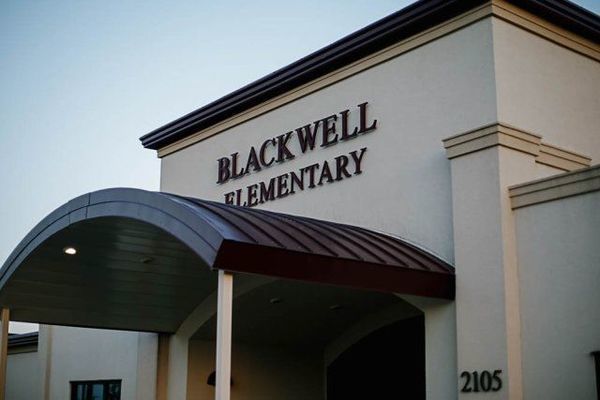 A local teacher is hoping to receive a grant for the construction of a sidewalk leading to Blackwell Elementary School – and she needs the community's help to get it.

Haley Curfman, a second-grade teacher at Blackwell Elementary School, has applied for a State Farm Neighborhood Assist grant in the amount of $25,000 to help build a half-mile-long sidewalk from 13th Street to BES along Ferguson Avenue.

Curfman said she was inspired to write the grant this spring after seeing just how difficult it is for some students to walk to school without a designated walkway.

“There are no sidewalks down either side of the two-lane road [going to BES],” Curfman wrote in her grant application. “That leaves students walking half an hour each day in either traffic or in a ditch. The students' safety is a huge concern.”

During inclement weather, the problems can worsen for students.

“This ditch always has standing water, and often times, [it] is lined with tall grass. During spring and winter, it's even worse, especially … where flooding is at an all-time high,” Curfman wrote in the application.

Out of a pool of nearly 2,000 applicants, Curfman's grant is in the top 200. But only 40 grants are given out each year, and they're given out to the causes with the highest number of votes.

That's where Curfman is asking for the community's help.

An online voting contest to decide which causes will win begins today – Wednesday, August 14 – and runs through Friday, August 23.

To vote in the contest, log onto http://www.neighborhoodassist.com and cast your vote by using your email address. Individuals can vote up to 10 times per day with each email address they register.

State Farm will announce the names of the grant winners on September 25.

If Curfman wins, she won't be the first person in Blackwell to do so. In 2017, father and community organizer Rocky Wood won a grant to help build the “Field of Dreams” for Kara's Game, a local charity that allows special needs children to play sports. According to State Farm Agent Mark Estep, Blackwell had the largest voter turnout in the nation for the grant program in 2017.

Curfman and Estep are asking members of the community to get online and help Blackwell build the sidewalk.

“This is something we can all get behind,” Curfman said. “Vote early, and vote often.”