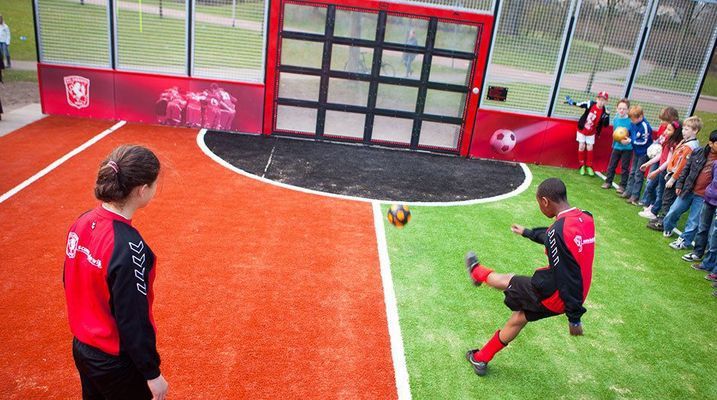 The Blackwell City Council held a regular meeting Thursday, August 15 and a special meeting Monday, August 19. At both meetings, the Council voted for new programs that city officials hope will benefit the community’s youth.

During the August 19 special meeting many members of the community came out in support of City Manager Janet Smith’s proposal for a SUTU wall to be placed at Memorial Park. Smith said she had taken input from all the groups in attendance. She had also requested feedback from other members and leaders of the community.

According to the manufacturer’s website, the SUTU wall contains 16 impact-sensitive panels, which measure and react to impact from things like soccer balls. LED lights and audio speakers give players feedback on their performance. At least five different games can be played with the wall, and the games are updated regularly. The wall also has smartphone capabilities and allows for leader-boards to connect players all across the globe. While it is predominantly used for soccer, the wall also works with baseballs, softballs, and footballs, meaning it can be used by several of Blackwell’s athletic programs.

Smith, Mayor T.J. Greenfield, and several others said they were excited by the prospect of the wall. Councilman Jon Webb , however, said the Council should “hold off” and seek “public input” about the wall. Smith said that the members of the community had been giving their input for the majority of the meeting, as well as outside it. Smith has met with numerous groups about their ideas for improving the community. Many of those projects were presented to the Council and approved at last Thursday’s regular meeting, with plans to bring more projects to Council in the near future.

After hearing input from Blackwell’s FOP and Tourism Board, as well as numerous residents, the Council voted to purchase two (2) walls at a cost of $46,000 each. The funds for the walls will come from the city’s Recreational Sales Tax fund.

In last Thursday’s meeting, the Council voted to purchase six sets of bunker gear for the Blackwell Fire Department for a total cost of $18,840.

Fire Chief Cory Hanebrink informed the Council that the price of bunker gear was set to rise “exponentially” in September. Purchasing the equipment now, he said, was “the better alternative.” The city will make the purchase using its long-term debt fund.

The Council also voted to approve an appropriation to give the Blackwell Fraternal Order of Police $1,106 to be used for the organization’s youth soccer and basketball programs from the city’s Recreational Sales Tax fund.

A presentation was then made to the Council regarding the future of Memorial Park’s skate park, which was built in the early 2000s. The Blackwell Tourism and Development Board — and its “Skate Park Subcommittee” — were both on hand. The Council awarded $64,763 from the city’s Recreational Sales Tax Fund to the skate park. The money will be used to install new ramps, poles, and other attractions at the park. Officials hope that the park can eventually be used as a home for skating competitions and other events.

Next, Denise Hindman, director for the Blackwell Youth Center, was awarded $4,000 from the Recreational Sales Tax. The money will help the BYC continue and expand its fall and holiday programs.

The Top of Oklahoma Museum Board was approved for $7,900.00 to go towards next year’s 65th anniversary of the 1955 Tornado exhibit. These funds will come from the Recreational Sales Tax Fund. The planned exhibit would have a “debris wall” in the museum, as well as several interactive and informational exhibits to showcase the devastating tornado outbreak. Museum Board Director Dianne Braden made the presentation, and Museum Director Melissa Hudson noted that the museum would be putting together a documentary film, and interviewing survivors of the tornado.

The Kay County Fair Board was approved for its annual lease agreement, as well as a $5,000 contribution from the Recreational Sales Tax Fund. The money will help pay for performers at the fair next month. The band 51 Junction will be performing, as well as NOC’s Roustabouts. The Chainsaw Carvers will be back, as well as a blacksmith, and a catch/release fish pond, and other attractions.

The Council approved seeking bids for heating and air conditioning maintenance contracts for all municipal facilities. Before convening into executive session, the Council opened the meeting of the Blackwell Municipal Authority. Greg Sixkiller, electrical department supervisor, was approved to seek a digital system assessment and analysis for an electrical map that would be used to accurately look at the city’s electrical grid.

Sixkiller said the maps he has at the electric department have not been updated in over a decade, and it is nearly impossible to get any new employees to understand them since so much has changed. Ultimately the BMA Trustees approved the request to map the electrical system.

The Council entered executive session for less than an hour. After reconvening, a motion was made and approved to direct the City Manager and City Attorney to write a summary of the report with points to review, before releasing it to the District Attorney and the public. The meeting was then adjourned.