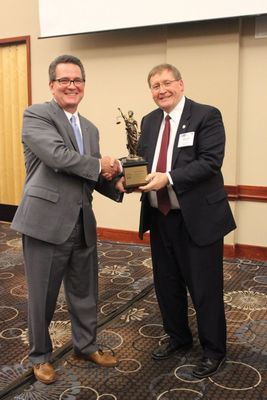 Kay County District Attorney Brian Hermanson was recently awarded the Scales of Justice by the Oklahoma District Attorney’s Association for his “outstanding work” as the organization’s president over the past year.

According to a press release sent by the awarding organization, Hermanson “worked closely with the other 26 district attorneys throughout the state in an ongoing effort to strengthen the enforcement of laws, and to protect the citizens of Oklahoma.”

According to an article on http://www.itsaboutjustice.com, a website that defines legal terms, the Scales of Justice represents balance and fairness in the judicial system. In some depictions, a blindfolded woman better known as “Lady Justice” can be seen holding the Scales of Justice.

The award was presented to Hermanson by the organization’s incoming president, Jason Hicks.

Hermanson received his Bachelor of Arts degree from Carroll College in Waukesha, Wisconsin. He then received his Juris Doctorate from the University of Oklahoma.

In 2019, he received the Victim Rights Champion Award for the state of Oklahoma.

Hermanson lives in Ponca City with his wife, Ruslyn. He is the proud father of two daughters.