Kay County Fair to look brighter than ever 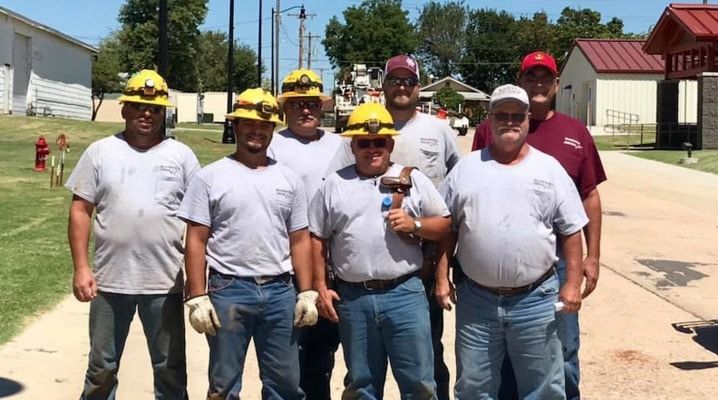 Visitors to the Kay County Free Fair might notice something new towering over them as they pass down the midway at the fairgrounds next week: the streetlights.

In late August, city crews installed a new set of streetlights along the midway. Tall and elegant light fixtures that harken back to the early 1900s, these lights were originally meant to be installed for the fair's centennial in 2017. Blackwell Mayor T.J. Greenfield said it was a “matter of timing” that kept them from being set-up.

“We had been doing a lot of renovation to the area just before the centennial with the event center being built, the midway being repaved, and the demolition of the old building. We were all spread pretty thin, and we didn't end up getting the light poles themselves in until December 2017,” Greenfield said. “By then, the electric department was backed up and swamped. … And just last week, it seemed everything finally came together.”

The city purchased 10 of the light fixtures complete with banner brackets and flag holders, which will display Blackwell-themed visuals during the fair and other events.

“We have several banners that have been seen on Main Street like for the museum, the fair, [and] Maroon Spirit. I think it's an important visual to really ‘set the mood’ and make the fairgrounds really 'Blackwell',” Greenfield said. “City Manager Janet Smith and Electric Department Superintendent Greg Sixkiller worked together to map out where the lights would go. Obviously, layouts changed since the original plans back in 2017, but I think it is all of our hopes that soon we'll order and install more lights that would stretch all the way down south towards the baseball field.”

Greenfield praised the workers of the Blackwell Public Power Department, who put the lights up within a matter of days during the summer heat.