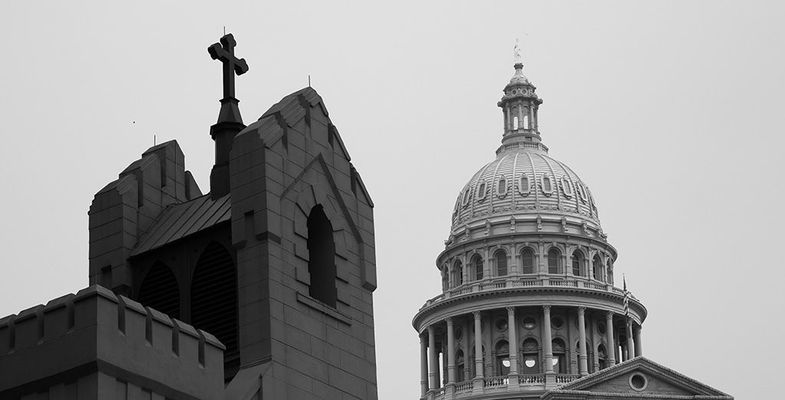 The First Amendment to the U.S. Constitution states: “Congress shall make no law respecting an establishment of religion, or prohibiting the free exercise thereof. …” And thus, separation between church and state was created.

Today, this seems normal and rational to us. But back in the 1700s this was a radical idea, one that made our Constitution – and our country – unique.

Before the United States was born out of the ashes of the Revolutionary War, countries in Europe had had a very bloody time trying to deal with religion since the Protestant Revolution in the early 1500s.

Catholics killed Protestants, and Protestants killed Catholics. In many cases, it was not the people that dictated which side of the debate they supported, but rather the ruling class. We saw this play out in England when Henry VIII took over everything the Roman Catholic Church had in England; he declared himself to be the spiritual ruler of the one official church for all of England. Even today, we still see the repercussions of this in Ireland.

When our founding fathers, in their God-given wisdom, wrote the Constitution, they wanted to make sure that religious blood baths did not occur here. That’s why we have the separation between church and state.

In 1954, Lyndon B. Johnson did something that I feel was truly unconstitutional: He introduced a new tax code that restricted non-profits from endorsing or opposing political candidates. I understand why LBJ did this: because non-profits get tax-exempt status, not because they are religious in nature. The thought was that the less a non-profit has to spend on taxes, the more they can spend on community; and if they are not paying taxes, then they should not have a political voice – at least, not when it comes to specific candidates.

Again, I can understand why LBJ did what he did, but I still believe it is a violation of the First Amendment’s rule about separation of church and state.

Here’s what I mean by that: The state cannot and should not get involved with church matters. But it is right, proper, and biblical for church to be involved in state affairs. If you think about it, almost every law on the books is a moral declaration of someone’s moral standards. The law represents, accumulatively, a community’s morals.

This is one of the reasons why we see within the “Bible-belt” more conservative, traditional, and biblically moral aspects to our laws than we do in areas of the country where religion has become less vital within the daily lives of citizens. I still remember when “Blue Laws” were enforced here.

Since LBJ’s 1954 tax code amendment, the voices of Christians in and out of church have been aggressively silenced by a loud minority. Separation of church and state is no longer viewed by many as only the limitations of the state’s power; it is often viewed as a limitation placed on churches and Christians.

The Cato Institute in 2017 released a poll showing that 71% of people in the U.S. are afraid of expressing their religious views, and 58% are afraid to express their political views because of political correctness. It’s not just a fear of offending someone; it’s a fear of being attacked.

We read in Ephesians 6:10 that our enemies are not flesh and blood, but “rulers, against the authorities, against the cosmic powers of the present darkness, against the spiritual forces of evil in the heavenly places.” These forces play out in our world. These forces shape cultures and thoughts. One might even say they have shaped the extreme political correctness that has forced insanity into our legal systems.

Since 1954, we Christians have been told to shut up, sit down, and not make waves. If we do, our tax-exempt statuses will be revoked. Too often we have listened to those voices out of fear. My dear fellow Christians, we were never called to live in fear. Even when Christians face death for their faith, we are called to do so without fear. How can we stand on the shoulders of giants, many whom were martyrs, and live in fear of separation of church and state, and the loss of tax-exempt statuses? Every law is based on someone’s morality. Why shouldn’t it be a Christian’s morals? Love, grace, mercy, and a strong love for all life. Is that so bad?

No fear; stand up! No fear; speak out! No fear; vote based upon your faith!