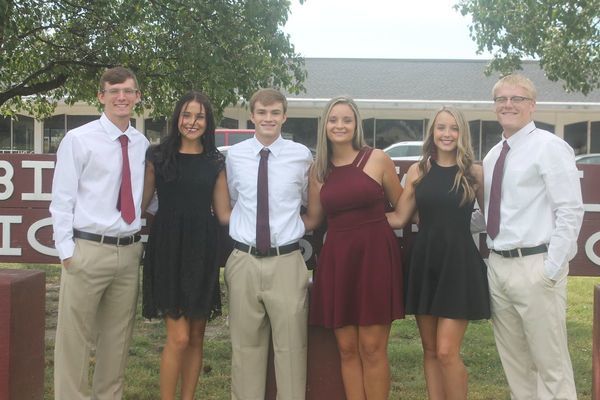 Maroon Spirit Carson Garrett is the son of Donna Dunham Garrett and Jay Garrett. He is the grandson of the late William and Louella Dunham as well as Jody Collier and the late Carl Garrett.

Carson attended Owasso Public Schools for four years and has spent the past nine with Blackwell Public Schools. He was basketball royalty for two years, a member of the National Honor Society, as well as Blackwell's Gifted and Talented Student Program (GATS). Carson is a frequent blood donor, and Brady Bechtel Award Winner. He has participated in Maroon Pride Day, Blackwell “Trash Off” Day, and served on the student council as well. Following BHS, he plans to attend Northern Oklahoma College (NOC) before transferring to Oklahoma State University (OSU) for Sports Medicine.

Miss BHS Madison Kincaid is the daughter of Michelle and Danny Kincaid, and the granddaughter of Terry and Rosie Hall as well as Jim and Karen Kincaid. She has attended Blackwell Public Schools all her life.

After BHS Madison plans to attend NOC, then transfer to OSU to become a veterinarian.

Kendall Burtner, Maroon Spirit runner-up, is the son of Jamie Burtner and Larry Burtner, and the grandson of Cheryl and Jimbo Graves as well as Paul and Eula Burtner. He has attended school in Kildare, Ponca City, and Blackwell.

Kendall was football captain for two years, 3A-1 District Receiver of the Year, recipient of the “Whatever It Takes” Award, basketball team captain, basketball MVP, and on the National Honor Society. He is a blood donor, lifeguard, referee for the FOP, and a member of the BancFirst student bank board, as well as student council.

Kendall plans to attend a four-year school, get a degree in finance/economics and “live a happy life”.

Runner-up Brett Lenon is the son of Gina and Jason Lenon and the grandson of Rudy and Debbie Glass as well as Lila and Jim Lenon. He has attended Blackwell schools all his life.

Brett has been named football and basketball royalty, as well as Freshman Player of the Year and Basketball Defensive Player of the Year recognitions. He said that sports have made him a responsible adult: “I learned the important of education and how to set personal goals. I learned to work hard to meet those goals.” Brett plans to attend Oklahoma Christian University to major in accounting.

Emma Paige Morrill, Miss BHS runner-up, is the daughter of Jason and Amy Morrill and the granddaughter of Nick and Becky Currier from Nardin as well as Janet Morrill of Blackwell and Mike and Christina Morrill of Perry, and Allen and Jo Collyar of Pine Grove, LA.

Emma has attended Blackwell Public Schools all her life. She has participated in cheerleading and pep club for four years, student council for three years, FCA for three years, golf for two years, basketball for one year, track for a year, and is currently on the BancFirst student bank board.

She was homecoming attendant her sophomore and junior year and voted favorite junior by the Class of 2019. She was on the president's honor roll for one year, superintendent's honor roll for two years, and attended the NOC Youth Leadership Oklahoma Class her freshman year.

Emma plans to attend NOC, then go to a program for sonography, and to have a wonderful family someday.

Paige Scott, Miss BHS runner-up, is the daughter of Johnny and Leona Dice, and the granddaughter of Sonny and Donna Olmstead as well as Jim and Betty Vickers and the late Gary Scott.

She has attended Blackwell schools all her life.

Paige was Freshman MVP in basketball, Junior Offensive Player of the Year, regional champion in cheerleading, football attendant her sophomore and junior year, and was in pep club as well as student council for four years. Paige was on the BancFirst student bank board and participated in Girls State. Paige plans to play basketball in college and further her education into teaching.