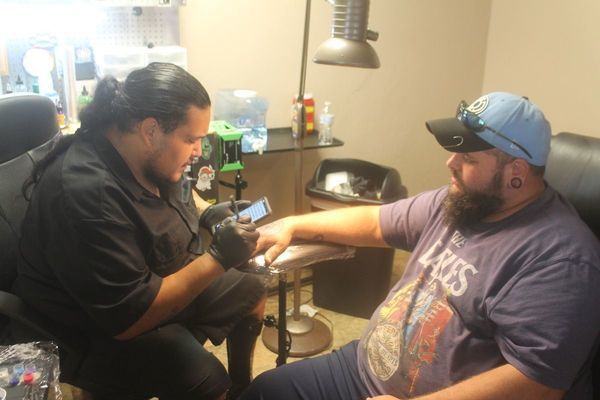 Though the Crimson Owl tattoo parlor held its grand opening during Labor Day weekend, owner and operator Alex Robles has spent nearly 10 years as an artist at his private studio.

Known to many as “Wubba,” Robles got his first tattoo at the age of 15. He’s been in love with tattoos ever since, vowing at that early age to make a living doing tattoo artistry.

“I loved comic books and art,” Robles said. “I was always drawing my favorite characters from Marvel, DC, all of that. I know a lot of people who went to be artists – you know, getting degrees from college – and most of them all still have day jobs. It's not a really sustainable passion, so that's why I wanted to be a tattoo artist. I wanted to do what I love, and be able to provide for and care for my family, and my family's future.”

After operating out of his private studio for a while, it was time for Robles to expand his operation. He said he was fortunate enough to open his own full-fledged shop. He plans to expand into the piercings market as soon as he can find the right person for the job.

“My wife, Amanda, loves owls, so that's where 'Crimson Owl' came from,” Robles said. “The community has been nothing but supportive since we arrived here. We have decals, shirts, and a lot of branded things with our logo. I'm happy to say we're almost completely out. We're having to order more.”

Before opening the Crimson Owl, Robles would do approximately 20 – 30 tattoos per month in his private studio. In the short time since his new shop has been open, he has come close to matching that number.

For Robles, operating the Crimson Owl might be about providing for his family. But it is also about impacting the lives of others and preserving history, he says.

“We had a lady that came in for a tattoo here last week – just a little one, you know – and we got to talking,” Robles said. “She had a lot of issues with her body and how she saw herself. We sat up here for seven hours and got an entire sleeve done on her, because she wanted to be happy with herself. We improved her self-esteem, made her more comfortable in her own skin. I think that's the greatest blessing that can come with this career.

“I had a man come in here who wanted a tribute tattoo done. It's incredible when you do that for someone and touch people’s hearts [and] honor them whether they're still with us or not. It's so humbling to be a part of that.”

Robles describes himself as an “analog artist,” meaning he still does his work by hand. But he admits that he has been slowly adapting to the ever-prominent digital landscape.

“I've been working digitally, mostly when I'm trying to do a cover-up for someone,” Robles said. “I'll take a picture of their arm and figure out how to work around that.”

Robles is currently offering a deal for his customers. A 2 x 2 tattoo costs $50, with two tattoos for a total of $100.

“If you want to bring a friend or just spoil yourself, we're doing the two for $100,” Robles said. “It's been really popular. I try to keep the pricing fair and relevant to the size and detail, just like any artist, so there's no real 'flat rate' for tattoo work.”

Robles said he is busiest around tax season and holidays.

“People get money and they want tattoos. I can't blame them,” he chuckled.

A Blackwell native, Robles said he is excited about being a part of the community – and making his mark on Blackwell's business landscape.

“I want to give back to the people and community that I was raised around,” he said. “I love the feeling it gives me when I can give someone a tattoo that makes them happy, or to feel better about themselves or their bodies, or to cherish a memory. It's my favorite part of what I do.”

The Crimson Owl is located at the intersection of 6th Street and Ferguson Avenue. The shop is open from 12 noon – 10 p.m. Tuesday – Saturday via appointment or walk-in.

The Crimson Owl can be found on Facebook under the name “Tattoos by Wubba.”