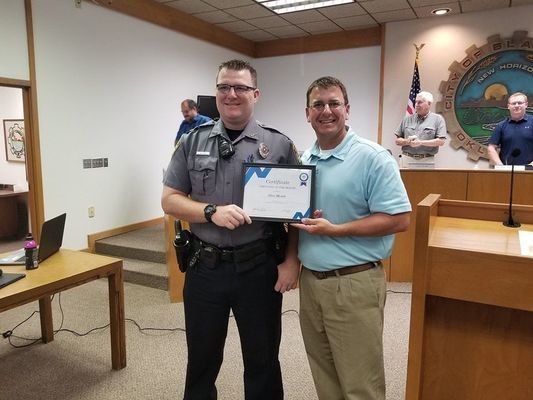 Blackwell City Council met last week for a brief meeting where a new position was approved within the City of Blackwell and the upcoming “Homecoming Block Party” was discussed.

After approving minutes, the Council heard from department heads, including Chief of Police Dewayne Wood, together with City Manager Janet Smith, named Alex Myatt as the City of Blackwell's Employee of the Month for his public relations work and relationship with the community.

Moving onto business, the Blackwell Public Trust Authority was approved for a meeting on October 15. The Council then approved seeking bids on fencing projects at the Memorial Park Tennis Court and Blackwell Animal Control facility.

The Council accepted a bid from Access Elevator & Lifts Inc for $32,000 to upgrade and replace the lift at the Blackwell Public Library to make the site more accessible.

Blackwell's Pocket Park was then officially renamed to “Maroon Park” and was designated to host the City of Blackwell's First Annual Blackwell Homecoming Block Party on Saturday September 28 from 10 a.m. until 2 p.m.

The event came from City Manager Janet Smith with help and input from several groups and individuals in town. Smith commented that she was eagerly anticipating seeing Homecoming up close and personal, as much as it has been hyped up to her.

Code Enforcement Officer Jerry Wieland said he had been in contact with BHS Principal Haskins on allowing the band and cheerleaders to perform during the party.

The Council then approved to seek bids for a scrolling marquee sign to be placed at the fairgrounds, advertising for the Event Center. City Manager Smith noted that the sign on Doolin which has been out of commission for years will likely be done away with in favor of the sign at the fairgrounds.

The Blackwell Animal Control Facility was spoken of on behalf of Chief of Police Dewayne Wood and approved for an expansion, including a drop pen and outdoor run track, from a private donation from Gentle, Turner, Sexton, Herbinson, LLC.

Traci Hanebrink then spoke to the Council and was approved to seek bids to replace two computer software server systems, which was already budgeted for 2019-2020.

The Council then approved for new Christmas decorations to be purchased and placed on light poles and other areas around Blackwell.

New playground equipment for Legion Park, Beatty Rogers Park, and other parks as needed were also approved for purchase.