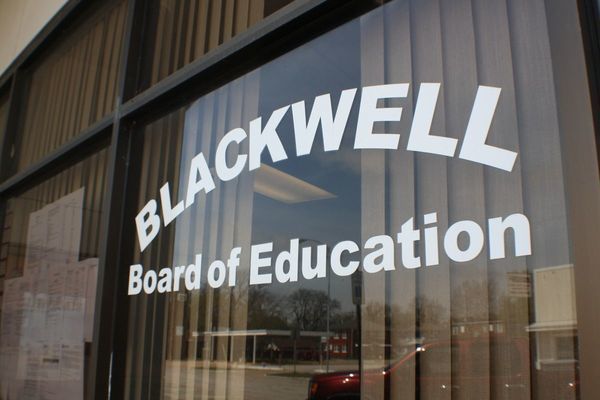 The Blackwell Board of Education met last night to approve several new positions including an assistant principal for Blackwell Middle School.

The meeting began with the approval of the 2019-2020 Estimate of Needs, which Interim Superintendent Rod Reese spoke on, saying there was lost value within the Blackwell district due to the wind farm tax exemption expiring. The Board then approved yearly changes to the graduation requirements, extended school day policy as well as the medical examination policy.

Blackwell's Vo-Ag instructor Cheyene Bergman was approved to take students on an out of state trip to the National FFA Convention in Indianapolis, IN from October 29-November 3.

The Board then accepted the resignation of Blackwell High School custodian Melody Simon and approved the employment of Chad Bodenstein as Assistant Principal in Blackwell Middle School as well as BHS girls basketball coach. Rita Poindexter was approved as a Blackwell Elementary School mentor teacher, and Reagann Murphy was approved as a BES Intern Teacher.

Rosa Hernandez was hired as the BHS custodian with Doug Schoof brought on as a district groundskeeper and bus driver. Brady Hill, Kira Gould, Randal Bishop, and Anne Bennett were approved as district substitutes.

The principal reports were next. Shawn Haskins, BHS, said enrollment was up and that the Back to School Bash was a “huge success”. Haskins also noted they will be doing a pep rally Friday where band members and cheerleaders will be going to “raise spirits” at Blackwell Elementary.

Becky Miller, BMS Principal, noted that the site's programs such as “Swag” and “Squads” were going well and that Bodenstein has settled in as assistant principal, joking that they haven't managed to keep him in his chair since he arrived.

The three principals from BES- Jennifer Hankins, Mellissa Agee, and Melissa Moore- then gave their reports, noting that the year has gotten off fantastically and they are excited for their several fall programs for students.

Interim Superintendent Reese exclaimed that his favorite part of the meeting has been hearing from the principals, and that everyone involved has been doing a wonderful job.