Review: HUSTLERS is an engrossing human drama with glitter, pumps, and strip poles 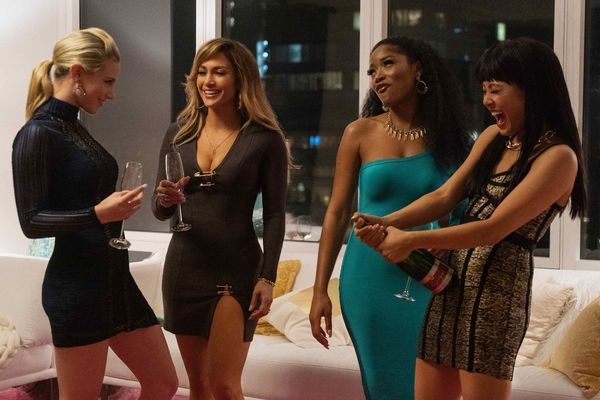 Those words, hauntingly spoken through tears and a sense of justification, come from Constance Wu's character Destiny in this weekend's captivating HUSTLERS from director Lorne Scafaria, starring Jennifer Lopez, Keke Palmer, and Lili Reinhart as ex-strippers who drugged and robbed “Wall Street assholes” following the 2008 financial collapse as a way to make a living, based on the New York magazine article “The Hustlers at Scores” by Jessica Pressler, played in the film by Julia Stiles.

HUSTLERS has received critical acclaim and an impressive box-office haul of $33 million during it's opening weekend, and while it is has been compared in passing to stripper dramas like BURLESQUE and SHOWGIRLS as well as more “manly” crime dramas like GOODFELLAS, HUSTLERS exists in a category all it's own.

The film is, perhaps, profoundly “feminist” in that handles these women as people before they're strippers, and does it's own captivating dance, shedding layer upon layer until the glitter, pumps, glistening breasts, and wild makeup leave nothing but a dramatic and emotional story about sisterhood, friendship, and how we justify the wrongs (and rights) in our lives.

We follow CRAZY RICH ASIANS breakout Constance Wu's Dorothy, (stage-name Destiny) as she is being interviewed by Julia Stiles' journalist Elizabeth. Her humble beginnings as the abandoned daughter of Chinese immigrants left caring for her ailing grandmother sees Dorothy turn to stripping where she meets Ramona Vega (Lopez) a veteran stripper at a high-end New York City club who takes Dorothy under her wing.

At the club we're introduced to cameo characters like “Liz” and “Diamond” played jovially by real-life artists Lizzo and Cardi B (both are hilarious, here) as well as the co-leads Mercedes (SCREAM QUEENS alumn Keke Palmer) and Annabelle (RIVERDALE star Lili Reinhart).

Once the crisis sends the club to the dumps, and their strippers with it, Ramona hatches the idea to take their Wall Street high-rolling clientele to the bank (literally and figuratively) by drugging them, robbing them blind, and allowing her gang of she-thieves to get their lives back together.

HUSTLERS takes audiences through the highs and lows one would expect from a true-life drama film, and even though we realistically know where it will end, the relationship and turbulence between Dorothy and Ramona is the true beating heart of the story as we bounce back and forth between the “present” of the interview and 2007-2014 watching these “Hustlers” rise and fall. The energetic hedonism of watching these women seduce, drug, and rob from the rich and give to themselves (and their families) is peppered with moments of depressing reality in the face of judgement.

One scene, the morning after a catastrophic all-nighter, sees Dorothy getting back home and taking her young daughter to school, obviously late. She is still covered in makeup, glitter, and blood, wearing her tight leather pants, knee-high heels, and a revealing crop-top shirt in the stark light of day. She walks with urgency, but care, as she holds her daughters hand, walking her up to the school's front door. It's a fantastic use of body language from Wu and an equally complimentary use of camerawork in a one-take tracking shot from Scafaria who tracks Dorothy with the intent and dedication of a stalker, following her and the daughter close while catching the looks of judgement from straggling mothers in their business suits and casual-wear.

Another scene, which is all but sure to solidify Lopez as an Oscar contender this season, takes place at the end of the film where Ramona is being interviewed in the present by Stiles' character Elizabeth. Scafaria's greatest feat in the film as a director is her dedication to the close-up and her willingness to let her performers speak without much to say. Lopez acts the Hell out of her final scene with soft vocal inflections and shifting, watery eyes, as she goes through tokens in her wallet she carries with her. It is one of the best performances I've seen all year and knocks the film's hanging question out of the park on if Ramona was a good person in bad circumstance, or a bad one in worse circumstances.

With the flash, elegance, and eroticism of the strip clubs the film inhabits, HUSTLERS is thrilling, hilarious, and sentimental, locked and loaded with game-changing turns from leads Wu and Lopez that will defy your expectations and earn a remarkable spot in the pantheon of engrossing crime-dramas