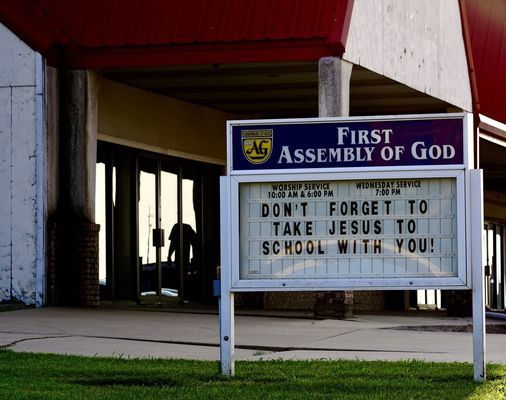 On Sept. 8, Sean Cormie went to church like he had in the past. But on that day, he brought someone else with him.

Cormie attended the First Assembly of God Church in Blackwell with his partner, Gary Gardner, when the two were allegedly assaulted by members of the church. The news of Cormie's alleged assault was first reported Friday by The Gayly newspaper, an Oklahoma City-based publication advocating for the rights of LGBTQ+ individuals.

Cormie said his mother asked him to come to church, and he invited Gardner to attend the morning service with him.

“I asked my mom, 'Are you going to start anything?' She said she wouldn't,” Cormie said.

Unbeknownst to Cormie or Gardner, the topic of the sermon that day was homosexuality.

At that point, Cormie and Gardner decided to leave the service. As they prepared to go, Cormie's grandmother allegedly pushed Gardner to the ground. According to Cormie, Gardner has Parkinson's disease, which causes him to lose balance easily.

“The whole church yelled 'Get out' to Gary, and then my grandmother and some other women pushed him out the door,” he said.

But Cormie, however, said he wasn't able to leave.

“My step dad held me down to the floor, and then [a man] punched me in the eye,” Cormie said. “I blacked out for two to three minutes. I was crying, I hurt, and I could barely breathe,” he said.

Cormie said his stepfather wasn’t the only person who held him down. He alleged that a total of 12 – 15 people held him to the floor.

Once Cormie regained consciousness, he found that his sister was the only one in the room who had made an attempt to help him.

“She said, 'You have God in you. Speak. What they did was not right.'”

CORMIE SAYS HE WILL PRESS CHARGES

After the service ended, Cormie and Gardner went to the Blackwell Police Department to report the incident. There, Cormie says, officers took photos of areas on his forearm and face where he was allegedly grabbed and hit by church members. He said the reporting officer took photos of bruises on his forearms, and he informed officers that he intends to press charges against those involved – even the ones who didn't approve of the alleged assault.

Cormie said some of the church members did not support pinning him to the floor. However, they are still complicit, he said.

While Cormie does intend to press charges, he said he will not seek monetary compensation.

“I'm not seeking compensation,” he said. “I want to see some charges, some jail time … something to get it through their heads that [what they did] is not right. I believe in forgiveness, but the Bible says there must be consequences for our actions.”

The Journal-Tribune filed an open records request for the police report on Saturday, but the report had not been completed as of press time.

RESPONDING TO THE ALLEGATIONS

“I'm not going line-by-line,” she said. “There were many things wrong, and they were too numerous to mention.”

McKissik said that there has been “no collaboration” between “eye witnesses” to the alleged event. She would not provide her own account of the alleged incident to the Journal-Tribune.

McKissik said she “prays the truth will be revealed. I have no fear of the truth.”

“We are a church of people of all different backgrounds that lovingly reaches out to others,” she said. “The family is very loving and has been supportive of their son. If people had all of the facts, they would see this in a different light.”

'I AM A CHRISTIAN'

For Cormie, understanding why church members allegedly chose to harass him is difficult. He said he has “always” attended the church. In the past, he has spoken during church services, attended church camps, and “willingly poured his heart out to Jesus” in church – where his mother and stepfather are youth ministers.

“I agree that homosexuality is a sin, and I pray for forgiveness, but I was born this way,” Cormie said. “I read the Bible daily, and I'm saddened that force would be a solution [to the church].”

Since the news of Cormie’s assault was released, Cormie has received an outpouring of support from people, including distant family members and members of the clergy.

“I have tremendous amounts of people messaging me, asking, 'Are you OK?' They tell me to be myself. I've got people from all over the world texting me,” he said.

Those words are enough to keep Cormie “rolling with the punches” – and enough to help him maintain his faith.

Despite the assault he allegedly endured, Cormie said he will continue to practice Christianity and eventually join a new church.

“I will continue to worship on a personal level until I find a church that, while they say homosexuality is a sin, will still love me,” he said. “I don't think what happened represents all churches.”

Even though Cormie has received support and encouragement, he says he is still shocked by what allegedly happened that Sunday. And he says he's still hurt.

“I would like to forgive,” Cormie said. “Homosexuality is a sin, but I'm born that way. I want to keep having a warm, loving spirit to show people the truth.