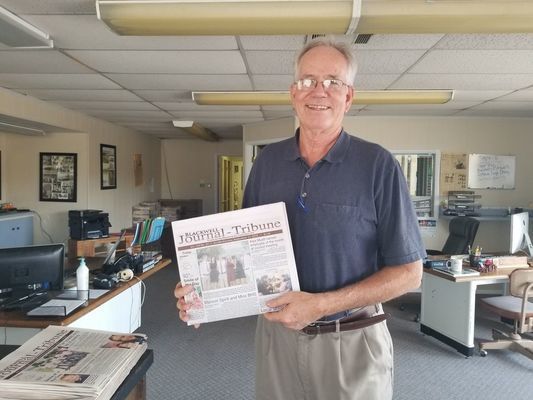 Rod Reese was enjoying retirement – until the people of Blackwell and the good Lord himself summoned him to be the interim superintendent at Blackwell Public Schools.

Reese was named the district’s interim superintendent after former superintendent Richard “Rick” Riggs reached an agreement with the Blackwell Board of Education to leave in August.

“I got a call asking if I was interested,” Reese said. “I prayed hard about it. I talked to a lot of people about it, and finally, I felt like God was leading me to do it. So now I'm working very closely with the board and with Blackwell's site leaders to find a new superintendent, and to help with satisfying Blackwell's financial needs and assessing the areas we need to work on.”

This isn't Reese's first time at the top. Reese spent five years as the superintendent for Tonkawa Public Schools. That was the capstone assignment on his 38-year career in education.

For 13 years, Reese was a principal at Tonkawa. He then became the district’s superintendent.

“I retired to spend time with my family,” he said. “I have one son in Seattle and another in Germany, so my wife and I like to travel and see them, as well as our 13 grandchildren. I'm also a weekend farmer, in a long line of farmers.”

Reese was born in Kay County, and he attended DCLA. He graduated with a class of 28 students in a school of 50. He said he was inspired to go into education by his math teacher, Neil Kahle. “Big” into athletics, Reese eventually decided he wanted to coach, too.

“I realized, through teaching and coaching, how much I love the kids,” he said. “That's what keeps us all going, I think. My time as a teacher, principal, and superintendent showed me how powerful good leaders can be, and that's what I'm taking with me here to Blackwell.”

Reese also addressed Oklahoma’s statewide teacher shortage. Classrooms across the state are staffed by non-certified teachers due to the shortage, but Reese feels that these teachers are not necessarily bad.

“We live in a culture – a society – of digital citizenship,” he said. “People accuse and judge others before knowing the facts. We have a tendency to act quickly and to hit 'send' before we actually think about what we're saying and who we're saying it to. I've done it myself. I think we all have. That's something I want to try to fix with myself and with those around me.”

Society's woes, however, are not Blackwell's issues. Reese said he couldn't be more excited to “take the reigns” on such a great district.

“Blackwell is so blessed to have a strong community that rallies behind the kids and the school,” he said. “Blackwell is in excellent shape academically, and the public expects excellence in almost every facet of how Blackwell's schools operate. Our music program, our athletics ... they have continually delivered, and the people of Blackwell expect that standard to carry over into every facet of how our school operates. That's what I want to prove to everyone.”