Haley Curfman paves the "Road to Education" with State Farm 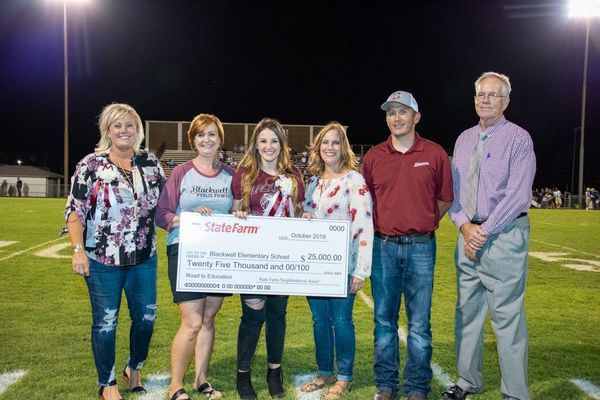 After years of waiting and months of work, Haley Curfman will finally be able to pave “The Road to Education.”

Curfman, a teacher at Blackwell Elementary School, has secured a $25,000 Neighborhood Assist grant from State Farm, a major U.S. insurance provider, to help pay for the construction of a 5-feet-wide sidewalk from 13th Street to BES along Ferguson Ave. The sidewalk, Curfman says, will give students a safer way to walk to school, especially during times of inclement weather.

Curfman applied for the grant in the early spring, and she said she “couldn’t be more happy” to be one of the grant’s 40 recipients from across the nation. She found out she won on Sept. 25.

“It's a great feeling to see so many positive things going on in my hometown, and to see how well this community supports students, teachers and the Blackwell Public School system,” she said. “It really wasn't anything special I did. The magic is in our community. When citizens of Blackwell band together, they make things happen.”

Curfman’s grant, entitled “The Road to Education,” fell under the “safety” category.

Curfman said that the sidewalk will provide a “clean, safe path” for students who walk to school.

“No child should have to choose between walking in a wet, tall-grass, muddy, prone-to-flooding-ditch-type area or the street just to get to and from school every day,” she said.

“Her grant was in the No. 1 standing for all but two days of the voting period,” Estep said. “I’m pretty sure she came out No. 1. I’m happy she saw a need and led the way.”

Curfman said she would like to thank Estep and members of the community who voted.

“It literally wouldn't have been possible without everyone taking the time to vote each day,” she said.

Curfman and Estep met with Blackwell City Manager Janet Smith in August to discuss what the city would do to help build the sidewalk if the grant were approved. Smith immediately began working on a proposal for the project. She contacted Guernsey Engineering, an Oklahoma City-based firm specializing in public infrastructure, to determine what the scope of the sidewalk construction project would be.

Smith will present Guernsey’s report to the City Council within the coming weeks. From there, construction plans can be drafted, and bids for contractors can be solicited under the direction of the Council.

Once contractors are hired, paving will begin on “The Road to Education.”