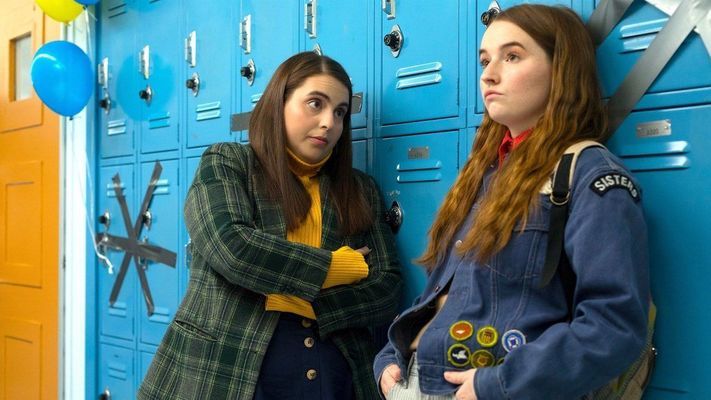 BOOKSMART, released at the beginning of the summer and now available on Amazon Prime, Redbox, and Bluray/DVD, is the genre-defining comedy of the year and is the film you wish you had in high school.

A fresh and feminine take on the “one last night” formula prevalent in similar high school films, BOOKSMART cuts to the core with a pulsing heart that draws tears, nostalgia, and gut-busting laughs from scene to shining scene.

Directed by Olivia Wilde off a script attributed to Emily Halpern, Sarah Haskins, Susanna Fogel, and Katie Siberman who all share credits across works like “Black-ish”, “Isn't it Romantic?”, and “Chasing Life” the film received critical love upon release, but was buried in the heart of the summer film season...which is sad, because this is better than 99% of the shit you saw over the summer.

BOOKSMART follows straight-A, college bound, book-worm best friends Amy (Kaitlyn Dever) and Molly (Beanie Feldstein) who come to the jarring realization that they haven't done anything through their four years of high school except be, for lack of a better word, 'booksmart'. The night before graduation, the two set out to prove that they can be fun, get laid, and be just as crazy as everyone else.

What's refreshing about BOOKSMART is the way the script carefully avoids marginalizing any groups by making the main characters do it for you, only to have their perceptions cratered just as heavily as yours are. I can't get into the specifics because many of them are spoiler-heavy, but I will say the handling of Amy's gay love interest is done exceptionally well and allows for a heavy-hitting moment during the film's climax. Also, Molly's crush on the “e-boy Supreme” YouTube copy-cat Jared (Skyler Gisondo) ends up leading to one of the sweetest moments I've seen in a “coming of age” film that, as mentioned, defies what she and by extension the audience expect.

The script is tight and hilarious, setting up jokes with payoffs that come both immediately and also ferment enough so that when they pop up again it hits you like a shot of Redbull and vodka. Molly and Amy are immediately likable, thanks in large part to their actresses who will both go on to have STUNNING careers. Even the characters who, in a lesser film, would be unlikeable are given just enough depth and beneath-the-surface material to give you insight as to why they may or may not be great.

Olivia Wilde makes her directorial debut here, best known in-front of the camera from films like TRON: LEGACY and TV's “House”. Her eye for what works on-screen is impeccable, and amplified by cinematographer Jason McCormick who has done work on films like ZODIAC and Kanye West's visual impressive music videos in the past. Together they give us parties and visuals that range from the sweaty and fun to the ethereal and mysterious- almost haunting. It's a gorgeous movie.

The soundtrack adds a lot to the film in terms of setting a mood, and I can personally say I've listened to every song in this feature about 40 times each since seeing it.

If you long to remember what it felt like to fall in love, to defy expectations, and to bond with your best friend, and live life like a Ciroc-infused, sexually imaginative, and completely genuine octave in a forgotten Taylor Swift song overlaying a trance beat, BOOKSMART is your must-watch.