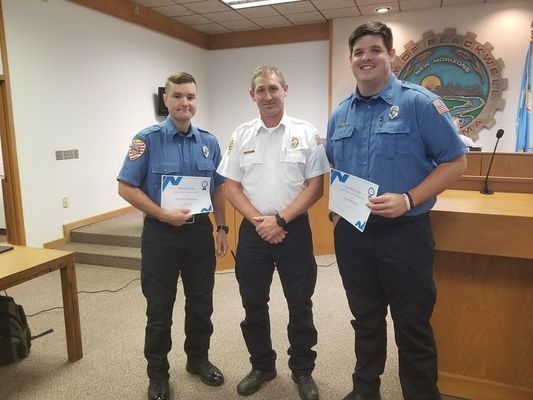 The Blackwell City Council spent much of Thursday night’s meeting debating whether to use the city’s newly-donated Red Cross property as a new fire station. But the proposal put before the Council wasn’t to build a new station – it was to develop a plan for the location of out-buildings to be used for storing the department’s fire equipment.

Starting off the meeting, Blackwell Fire Chief Cory Hanebrink named firefighters Timothy McKenna and Cole Whelton as the city’s employees of the month for their work during the county fair in September. The pair assisted an elderly resident to safety who was having trouble walking on the fairway.

Following Hanebrink’s report, Chief of Police Dewayne Wood reported to the Council. He said that the police and animal control departments have been busy for the past month. He stated that the county fair went “really well,” and added that there were no fights or intoxications there this year. Wood also congratulated Officer Kayla Green on graduating from the Council on Law Enforcement Education and Training, better known as CLEET.

After hearing from leaders of city departments, Mayor T.J. Greenfield read the city’s Halloween proclamation. It formally declared that “Trick or Treat” night would be held Oct. 31 from 6 p.m. – 8:30 p.m. A costume contest and a “Trunk-or-Treat” event will be held at the city’s event center from 4 p.m. – 6 p.m.

Next, the Council made six appointments to the Blackwell Youth Center Board. The Council reappointed Karen Ware and Billie DeBoard for three-year terms. Laurie Buesing, Tiffany Bennett, Megan Childers, and Barbara Ihrig were each given three-year terms.

The Council then voted to hire Ground Zero to replace the roof on the city’s street department building, which formerly served as the city’s armory. The total cost of the project will be approximately $105,000.

The most controversial item on the agenda was a $14,000 proposal to establish an emergency response campus on the Red Cross property.

Guernsey Engineering had proposed a plan for the property donated to the city with the condition that it be used for the expansion of the fire department.

Mayor Greenfield spoke first, sharing his thoughts on the City of Blackwell's spending:

“In no way is this against the Fire Department,” Greenfield began, “I've always fully supported the Fire Department and the City of Blackwell as a whole. We know the service they provide is vital to our community, and not long ago I allowed them to store equipment and trucks on the property I owned, for free, which was published in the newspaper.”

Greenfield continued: “I feel like we've been on a free-for-all spending spree with recreational items totaling at $991,583 dollars when only $524 thousand was budgeted. Out of that, $418 was a transfer and $106 thousand were actual items...there's not much been much planning on projects lately, and back in January I had shared spreadsheets of goals and projects the City of Blackwell had been working on. I think it's essential we plan for infrastructure projects for the future such as water lines, water plants, water sources, and streets. We have two long-term comprehensive plans that are available to us that we need to look at and go back to for guidance.”

“In no way is this against the fire department,” Greenfield began. “I've always fully supported the fire department and the city of Blackwell as a whole. We know the service they provide is vital to our community, and not long ago I allowed them to store equipment and trucks on the property I owned, for free, which was published in the newspaper.”

The property Greenfield was referring to was G & C Concrete, which closed in 2018.

“I appreciate the enthusiasm of Janet [Smith] and all the projects she has … but I believe the city needs to put the un-budgeted items on hold until our new CPA, Frank Crawford, can fully update the financial books,” Greenfield said.

City Attorney Bryce Kennedy acknowledged the mayor’s comments approvingly though they were not part of the agenda. Kennedy also noted that the fire department, which was built in 1909, is in dire need of repair, and compared it to the ‘Model T Ford’, which was first introduced in 1908.

Greenfield said he was in support of building a new structure for the fire department on the Red Cross property.

Hanebrink showed off pictures of the various states of disrepair that the city’s century-old firehouse is in. The building has plumbing problems, and there is not enough space for the city’s fire engines. Hanebrink also said that harmful gases are able to escape from the garage on the first floor and enter into the upstairs living quarters, where firefighters stay.

Councilman Job Webb said he would like to have more discussion on the matter.

“I think it's a great idea, but I'm not in favor of spending the $14,000 to explore this,” Webb said to Hanebrink. “We should take a look at what our long-range plans are for the city of Blackwell… You pointed out issues with the fire department, but we have issues with the water department, OK? So do we need a water plant? Yep. Do we need a fire department? Yep. … I would be more comfortable giving this idea to the planning commission.”

“Look at our charter,” Councilman Webb stated “It specifies we have a planning commission.”

Smith said that creating plans for city buildings was not the function of the planning commission. The commission reviews and makes recommendations to the council based on plans submitted by engineering/architectural firms. Then the council makes a decision whether or not to approve the plan design.

“You guys have asked me for plans, and you've told me that apparently we have some plans that are ‘mysterious,’ because I haven't seen them,” Smith said. “We have a capital improvement plan, but all that did in 2010 was to assess what we have currently and to say, ‘Here are the trends.’ There was no real ‘priority list’ that has been presented to the department heads.” Smith has said that she did not “inherit” any capital improvement plans when she arrived, and all of the projects going on currently have come under her direction.

“They're (the planning commission) not paid by the city to do all this work,” Smith said. “We pay our department heads to come in every day and give us their professional advice, which I then bring to you. We don't pay the City Council to come in and work. We don't pay you to be the professional in your field. Whenever my department heads come to me and say we have issues, I start researching so I can bring you professional advice from engineers and architects who know how to do their jobs.”

After asking for audience input, Councilman Richard Braden asked if the $14,000 towards the fire department planning should be applied elsewhere. Smith that this funding would not impact funding for other projects in any way.

After further discussion, the Council was unable to reach an agreement, and the proposal was tabled. The Council did, however, approve Guernsey to do engineering work for a sidewalk project at 13th Street and Ferguson Avenue. The sidewalk would run along the south side of the easement. The project includes the installation of a crosswalk, as well as a potential turn lane expansion project on Ferguson. The turn lane would help with traffic flow for the elementary school during drop-off and pick-up times.

The final item, a master contract with Guernsey Engineering for upcoming projects and task orders, was also approved and will allow further work with the firm in the future.