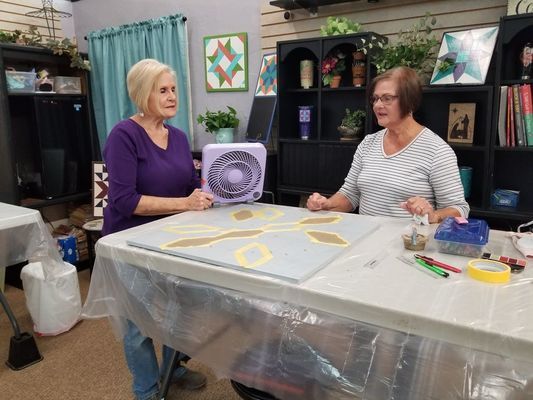 The city of Blackwell owes a lot to colorful, symmetrical squares. Thanks to the town’s barn-quilt and geocaching trails, hundreds of new faces are coming to America's Hometown each month.

John Robertson, executive director of the Blackwell Chamber of Commerce, explained that the runaway success of the trails was something he never saw coming.

“We have people that stop in from all over,” he said. “Weekly, there are folks coming in here to hunt the geo-trail, and they'll get some donuts, do the trail, shop around a bit, eat here, then tell their friends about it. The spots on Discover Oklahoma about Prairie Smoke and the Barn Quilt Trail have really brought a lot of new people to down.”

According to Robertson, people have driven to Blackwell all the way from south Texas to hunt the geo-trail, a geocaching adventure programed alongside the 62 arranged barn quilts in town. There are 40 geocaches in Blackwell.

In geocaching, participants use a GPS receiver or mobile device and other navigational techniques to hide and seek containers, called "geocaches,” at specific locations which can be found using GPS coordinates.

Commemorative coins will be given out by the Board of Tourism and Development to the first 250 people who complete the trail.

“We have mailed and given out close to 50 coins over the past seven months,” Autumn Kincaid, tourism director for the Blackwell Chamber of Commerce, said. “People have come from all over – Colorado, Florida, Texas, and Arkansas, just to name a few states.”

Currently, the Chamber of Commerce is preparing a map that will allow visitors to mark where they came from.

Cindy Oard, vice president of the Blackwell Tourism and Development Board, said she has been delighted to see the trail grow.

“Blackwell Tourism does a lot for the City,” Oard said. “This trail has done nothing but grow, just like our barn quilts. So many new faces have come into town, putting their money directly into Blackwell's economy.”

Mary Fredricks and Lois Thomason were in The Marketplace on Main Street for one of Oard's barn-quilt painting sessions. They said they came from Oklahoma City because of the segment on Discover Oklahoma. Another woman, who just moved to Oklahoma from California, said she was attracted by the same information. All three women called Oard because of the clip.

“I have two-day classes usually,” Oard said. “I do it twice a month, and they fill-up almost instantly. The minute I post about it on Facebook, they just swarm on it, and the spots are filled. People come from all over, and they usually spend the night in one of our hotels, eat here at our restaurants, and shop around.”

Another Blackwell merchant is also getting in on the action. Phillip Scott, owner of Prairie Smoke BBQ, said traffic from the trails has helped his business as well.

“People come here because, like Cindy said, they watch or read about one of our segments on Discover Oklahoma,” he said. “So, if they come for Cindy, they eat here. If they come to eat here, they get attracted to the barn quilts and decide to stay to check those out. We have a fantastic relationship because of that, and it allows us both to really thrive.”

The tourism board is involved in the ball-drop at the annual Kay County Free Fair. The board also helps provide banners that are used to decorate Main Street, among other things. Oard said that Blackwell has been chosen by the Oklahoma Freewheel Bicycle Tour as the last stop in the state on the group’s 2020 tour.

Established in 1979, Oklahoma Freewheel has grown into a long trek from the Red River to the Kansas state line. Participants discover “the Sooner State to be far from flat with an abundance of diversity,” according to the tour's mission statement.