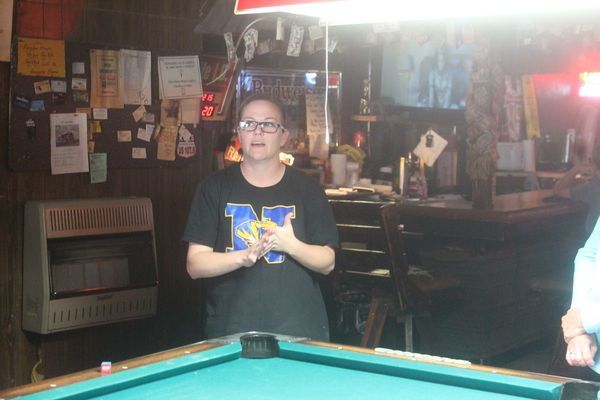 Newkirk Main Street Inc. offered a weekend of frights and delights with the Spirit Sightings Tour, which took groups of eager thrill-seekers around Newkirk to learn about the town's haunted history.

Karen Dye, director of the Newkirk Main Street program, said this is the third year of the Spirit Sightings Tour. It came about when Scott Cloud, the former editor of the Newkirk Herald-Journal, did research for a Halloween-centric article about haunted Newkirk locations.

According to Dye, Newkirk has 23 reported locations that have shown signs of paranormal activity.

“I used to not believe in these things either,” Dye said, “but my house is haunted. Stairs creaking, motion-sensor lights popping on, doors opening when they shouldn't be. ... I came home one day and saw my husband through our backdoor, and when I opened my mouth to ask him what he was doing home so early, well ... it turns out he wasn't my husband. It was a shadow figure, and just as sure as he'd been there, he had vanished.”

Dye said she wasn't scared, though. She's learned to live with it, much like many of the people giving tours have – including Kay County District Attorney Brian Hermanson.

The tour began across the street from the Newkirk Main Street program’s office at the Char-Ron Lounge, which is currently being used to film the Netflix Original Series “Hunting Jessica,” which details the story of a vampire-slaying bartender.

The lounge was opened by Ronald “Ronnie” Forbeck, along with his brother, Charlie Cravens, on June 19, 1979. After a brief hiatus upon Forbeck’s passing, his daughter, Tracee, re-opened the lounge shortly after its 39th anniversary on June 21, 2018. Tracee said that things have been picked up and thrown in the bar, with the more serious poltergeist activity happening on the second floor.

“When I lock up at night, I make sure I leave the front door open so I can get a clear sprint outside, so nothing surprises me,” said Tracee.

Next-door, the Cline Building is also a filming location for “Hunting Jessica.” The building was one of the first three in Newkirk, along with the county courthouse and Masonic Temple. It has had a long history of its own. A shadowy man – believed to be Mr. Cline himself – has been spotted moving around the building. A radio in the building would often change stations deliberately, electronic devices would malfunction, and doors would open and shut of their own accord.

At the Kay County Courthouse, Hermanson and Court Clerk Merilee Thornton both had tales to tell.

Hermanson guided a group up into the old jail cells on the top floor of the courthouse, which are currently used to store old legal documents. The cells are cramped, and they were originally built to house up to four inmates at a time. With the executions that took place at the jail, it was no surprise that spirits were believed to be trapped there, the tour guides said.

Hermanson's office is currently where a women’s jail cell used to be. Hermanson said he sees apparitions walking by his office door late at night when no one else is around, and he's even heard disembodied conversations echoing through the courthouse’s vacant marble halls.

“I know I'm not the only one here, even when I am,” Thornton replied to Hermanson.

Thornton said she is especially keen to when spirits are following her, saying that she has felt someone so close to her that they could breathe on her neck. She would turn, only to find no one in sight. Courtroom B is where most of the sightings seem to occur, with one concerning an older white male in a floral button-down shirt and a hat.

After touring the courthouse, the group heard from Newkirk Assistant Fire Chief Tim Walker, who spoke of a haunted chair at the firehouse. A man there used to occupy the chair, drinking coffee and smoking cigarettes every morning. He never moved from the spot until his death.

After the man’s passing, Walker and the others put the chair into storage. But that didn’t please the spirit, who began to rattle doors and throw things around the fire department. Walker said he woke up at the station one morning, freezing cold, and saw the man’s apparition. He told the spirit to relax, and said that they would put his chair back.

Walker said after the chair was returned, there were no more disturbances.

More disturbing stories came from Newkirk locals. The first resident, who operated a childcare center and daycare from the old Park Hotel building, mentioned that the site was a former Veterans of Foreign Wars meeting hall. The operator, Otto Abbot, was frequently seen roaming the halls after his death. The woman said she thought nothing of it – until the encounters became more sinister.

Laura Walton recalled contacting the Oklahoma Paranormal Society, and paranormal investigators came to the site twice. The first time, they had no findings. But the second time, they came to agitate the spirit in the hopes that it would reveal itself. They left 10 minutes after beginning their investigation, terrified, and told Laura that she should never return. While they never would tell her what they found, she mentioned that demonic entities are known to take the form and name of a familiar spirit to trick others.

Another resident who lives in a two-story blue home across from the courthouse recalled seeing a lumbering black figure with long limbs stalking her alleyway. She also talked about hearing the pitter-patter of footprints upstairs when she's alone. A child's laughter can often be heard in her home, and red eyes peer in from the windows some nights.

There is no shortage of haunted locations in Newkirk, and the Blackwell Journal-Tribune is currently seeking information on any around Blackwell.