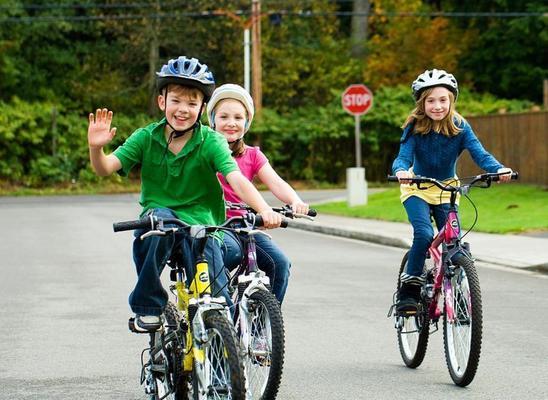 Two years ago, my wife went online and bought four bikes for our grandkids in California. All four were supposed to be shipped to California, but two of them were sent to our home here in Blackwell. My wife contacted the seller, Toys-R-Us, and told them that we would not pay to have the bikes shipped to them. To the store’s credit, they said not to worry about it: The representative said we could have those bikes, and the company would ship two more to our grandkids.

That was great customer service, but it left us with a problem. These were small bikes, and have you seen me lately? Even if I were at my “ideal” weight (which would make me look more like a zipper than a man), I still could not have ridden these little bikes. So, we decided to give them away during our Christmas Eve service.

Once we told our congregation our intentions, others jumped in and bought a few bikes to add to the giveaway. We ended up giving seven bikes away. The next year, Jourdyn Mooring and I decided that we would ask for public donations to see if we could purchase more bikes. Personally, I was expecting to collect enough to buy 20 to 30. But this community really showed some love, and we collected enough money to give away 74.

We did the bike giveaway during our Christmas Eve candlelight service. Even though the bike giveaway was wonderful and fun, the service was not. I had not anticipated having so many children and adults who had little to no experience in such a service, and it was wonderfully chaotic. It occurred to me that the proper service for a bike giveaway would be at a party – a birthday party, to be more exact.

So, that’s what we are going to do this year. We are going to have a birthday party for Jesus, where we will sing children’s songs about Rudolph the Red-Nosed Reindeer, Frosty the Snowman, and other lovable Christmas characters. We will eat cake, and, of course, have the bike giveaway.

This year, however, we will not be picking up the bikes from Walmart when we purchase them. Instead, we will print up a certificate for each individual bike. Each certificate will inform children and their families which companies or individuals sponsored their bikes. We hope that that the recipients of the bikes will thank the donors sending them a card, calling them, or stopping by to say “Thank you” to them.

Jesus’ Birthday Party will not be on Christmas Eve. It will be held at the church Dec. 22 at 6 p.m., giving adults the time they need to assemble the bikes before Christmas morning. You must be present to win.

Like last year, bikes will be given away through a drawing to children ages 17 and under. But this year, we aren’t shooting for 74 bikes; we hope to give away 100 brand new bikes.

If you are interested in becoming a full bicycle sponsor, the price range will be between $60.00 and $125.00, depending on the size of bicycle you want to sponsor. A full sponsor will have sole recognition on the bike’s certificate as an individual or as a company. If you would like to donate without fully sponsoring a bicycle, you are more than welcome to do that as well. We will pool these donations together to purchase bicycles, and we will write on the certificates that they were purchased by the people of Blackwell.

For many kids, a bike would be the best Christmas gift they could ever receive. For some families, buying bikes for their kids is out of the question financially, and this bike giveaway may be the only way their kids can get bikes. And for a few, this might be the only chance these kids have at getting anything for Christmas.

I have started going around asking businesses for sponsorships and donations, and I have been well received. So far, we’ve raised enough money to purchase about a quarter bikes we need, but we still need a lot more.

If you own or manage a business locally, please consider becoming a sponsor or a donor to help us reach this goal. Why bikes? Because, for me, getting my first bike was the greatest Christmas gift I could get as a kid. When you get a bike as a kid, your world grows. No longer are you confined to a block or two; now, you can explore whole neighborhoods.

I never felt more alive as a kid than I did when I was riding my bike as fast as I could with a group of friends. I want every child in Blackwell to have a chance to experience that same excitement and freedom.