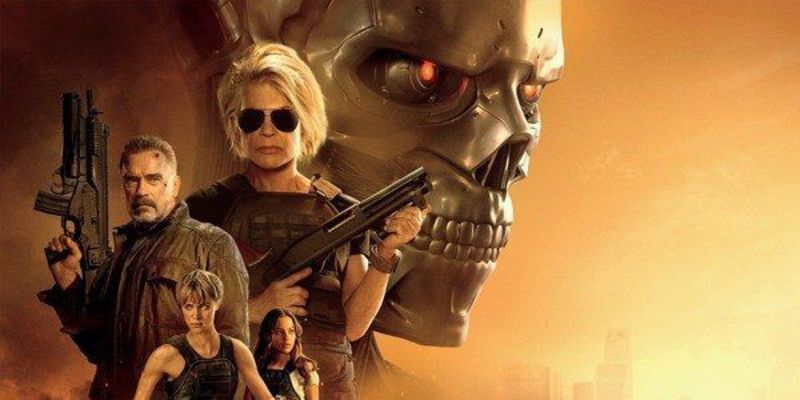 "You're not the threat. It's your womb."

Tim Miller's TERMINATOR: DARK FATE opened this past weekend to act as both closure to TERMINATOR and T2: JUDGEMENT DAY and an attempt to kick-start the frnahcise once again in the hands of a younger generation. Producer James Cameron, who helmed T1 and T2, returned to help the film along with Linda Hamilton who comes back for the first time since the 90's as the "Mother Mary" Sarah Connor, this time as a bazooka-weilding, grizzled, old woman. The film is an interesting blend of good ideas and bad ideas, told through the eyes of the less-than-artful Miller to deliver a film that...exists.

It's 2019 and the titular dark fate of Judgement Day has been averted after the events of T2. After John Conner was slain in the 90s at the hands of a rogue T-800 in Mexico, Sarah Conner (Linda Hamilton) has taken it upon herself to hunt Terminators that are being sent back in time for an unknown reason...until the goal presents itself in Mexico City in the form of Dani Ramos (Natalia Reyes) who is the target of a dastardly and advanced new Terminator, The REV-9, played with a menacing presence by Gabriel Luna. Before Sarah can save her, Dani is protected by an augmented warrior from the future by the name of Grace (Mackenzie Davis), who informs them that while Judgement Day at the hands of Skynet was averted, a hyper-advanced AI named "Legion" would still cause Judgement Day in another form. Dani, Sarah, and Grace must survive the REV-9 and fight the future to avert the destruction of all mankind.

Screenwriter David Goyer (The Dark Knight, Man of Steel) presents a "true" sequel to T2, side-stepping the often insulted TERMINATOR 3 (which is fine) and turning around from the fun, dynamic, and charming TERMINATOR: GENISYS. The film starts excellently, and we get a great action sequence where Grace and Dani escape from a manufacturing plant in Mexico from the REV-9. Grace is a great character, and her foil is that she is an augmented human made for "short, controlled bursts" of action against a Terminator. She explains, after her and Dani ransack a clinic for medication, that there is a brief window to kill a Terminator before it kills you. This is fantastic stuff, and it really presents a fun angle for the rest of the film. Sarah Connor takes Grace and Dani in, explaining that she hunts Terminators and "drinks until she blacks out" in her spare time.

We get solid, good work, from Linda Hamilton, who is front and center in the film's opening credits set to her deposition tapes from her insane asylum in T2 as she screams into the camera: "On August 29, 1997 it's gonna feel pretty f**king real to you too! Anybody not wearing two-million sunblock is gonna have a bad day. Get it?!" It reminds us how great of a film T2 was. It reminds us why we love Sarah Connor, going from a plucky waitress in T1 to a hardened, clinically insane perhaps, badass in T2.

There's a fantastic scene in a Border Patrol detention facility that really gives the great "predator/prey" dynamic of the franchise, and of course this is carried on the shoulders of the two female leads with Linda Hamilton and Mackenzie Davis. Unfortunately, the film screeches to a halt in in both fun and logic when the T-800 that killed John, a bearded and older Arnold Schwarzenegger named "Carl", meets up with our plucky crew. It was really obvious that they WANTED Arnold back, but the fact he is a cyborg with consciousness, with a platonic wife, and a home decorating business wasn't very keen. The film devolves into pure stupidity soon after with a long, bloated, action sequence that takes place from the sky in a cargo plane to the Hoover Dam before becoming great again for a brief moment in a well-directed and creative action sequence between the REV-9, Carl, Sarah Connor, and Grace involving chains, guns, rebar spears, and hand-to-hand combat.

I think the biggest problem to this film is how it handled Sarah Connor- a feminist action icon up there with Sigoruney Weaver's Ripley from the Alien franchise and Laurie Strode from HALLOWEEN. Last year's 2018 HALLOWEEN film gave us a very introspective look at the "survivor girl" trope and how it ages and psychologically effects those in question with Jamie Lee Curtis as a physically frail yet passionate, alcoholic, fevered defender waiting for Michael to return so she could murder him. Linda Hamilton's Sarah Connor gets almost no actual "depth" in this film, and no further characterization beyond her line of killing Terminators and drinking. The film wants us to buy the plucky Latina teenager as the new face of a future rebellion, but she is a boring character without much to work with. Sarah deserved a lot more than this, and DARK FATE could have been a compelling and emotionally impactful send-off to her...but it wasn't.

TERMINATOR: DARK FATE attempts to "redeem" the franchise from the critics who hated 2009's SALVATION and 2015's TERMIANTOR GENISYS but took too few steps forward and several steps back from the accomplishments of those two maligned films, the latter I enjoyed greatly. It is a fun film to watch, and has some moments of glory to brag about, but despite being heralded as a "feminist action movie" doesn't earn that classification, which is tragic, given that Sarah Connor is one of the most badass women to ever live.

I saw this film in the Dolby Surround Sound theater at AMC Wichita, and given the fact my date passed smooth out for about 20 minutes following the aforementioned glorious 1st act action scene in Mexico, snoozing through the baffling Arnold introduction, and waking up in time to meet some random character that delivers an EMP bomb to Sarah and just shrugged it off to enjoy the 3rd act finale should basically give you the gist of which parts of DARK FATE were worth watching.