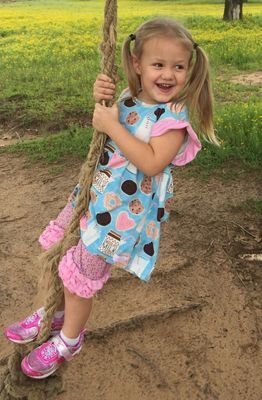 Four-year-old Jessamine Reames, born in Ft. Carson, Colorado, will hold the title, the VFW announced in a press release. She is the daughter of Brad and Jeannette Reames of Blackwell.

Staff Sergeant Brad Reames is an active-duty M1 Abrams battle-tank operator for the United States Army. He has served for nine years, and he is currently on his fourth deployment.

Jessamine Reames’ maternal grandparents are Pat and Sharon McCurry of Blackwell. Pat McCurry is a U.S. Navy veteran, and he is currently the commander of Blackwell’s VFW post.

Jessamine Reames also has numerous relatives who are VFW Auxiliary members, according to the release. Her paternal grandparents are Lisa Reams, Dewayne Chambers, and the late Jerry Reames.

Jessamine Reames has an older sister, Serenity Reames, and many other relatives who have served in the military.

She enjoys playing with her older sister and spending time with her family.