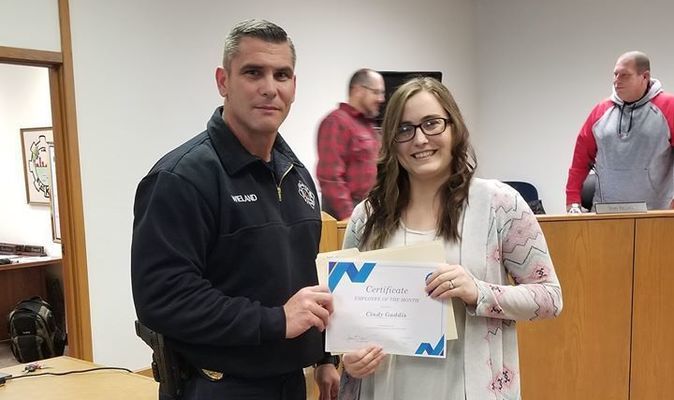 The Blackwell City Council came together Thursday to discuss the city’s skatepark and to discuss an ordinance that would allow four-wheelers and other vehicles to be driven on city streets.

The meeting began with the recognition of the Employee of the Month for November. The award went to Cindy Gaddis for her work in the code enforcement department, and for her videography of Council meetings. Code Enforcement Officer Jerry Wieland spoke on Gaddis' behalf, and he said working with Gaddis is an honor and a privilege he was happy to share.

The Council next recognized the Leadership Blackwell Class of 2019. City Manager Janet Smith is a member of the group, and the members gathered for a group photo. They sat in on the meeting for its duration.

After recognizing the group, the Council approved Resolution 11072019, which provides for the purchase of accrued but unused employee vacation time from city employees.

Next, the Council approved Ordinance 2019-18, which deals with sidewalks being required for new and remodeled developments. Though the Council passed the ordinance, members voted to remove a subsection that dealt with charging property owners a fee if they chose not to develop sidewalks on a new development.

The Council then discussed Ordinance 2019-21, which would establish regulations for UTVs and golf carts to be driven on municipal roadways. The item was discussed at length and approved, but it will not go into effect immediately because it was not approved as an “emergency.” It will be published in full in The Blackwell Journal-Tribune and will go into effect Jan. 1, 2020.

After discussing ordinances, the Council appointed Pat Hullet to the Blackwell Economic Development Authority. She will fill the office of Steve Marquardt, a member of the City Council.

The Council tabled a bid for renovation work on the Top of Oklahoma Museum. The bid for $250,000 didn't include several repairs that are needed, according to city officials. Certain items weren't in the bid packet, such as interior wall repair and the reinstallation of the original lighting in the dome. The item was tabled so that the City administration can review the bids for renovation to the museum and will make a recommendation to council at the next meeting

The Council also awarded a bid for a fencing project at the city animal shelter in the amount of $12,000 to Ranchers Pipe & Steel. The money will come from the city’s zinc smelter settlement fund.

A bid was then awarded to Diemer Construction. The company will provide fill sand for the street department. Bids for concrete, asphalt, cold patch asphalt, sand, and rock were also approved.

The Council then convened in executive session, but no action was taken. City Attorney Bryce Kennedy made a statement following the executive session, saying that the city will plan a public meeting in the near future to discuss the progress of the Blackwell Regional Hospital project.