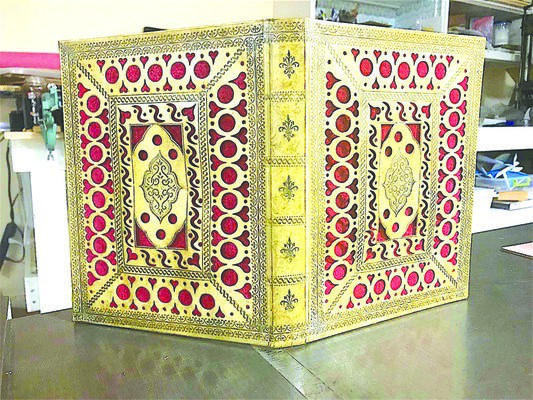 Blackwell's own Sean Richards was recently recognized with an honor few people might even know about: the Historic Binding First Prize from The Antiquarian Booksellers Association Trust. He received the award for his work on a blank book “which provides a creative twist on traditional bookbinding,” according to the Society of Bookbinders’ International Competition results.

Richards was one of only two entrants from the U.S. to place in the prestigious running, with his work being recognized alongside several artists from the United Kingdom, Switzerland, China, and Spain.

Richards owns and operates Byzantium Studios in Norman, specializing in early European-period bindings. He is a conservator of paper, vellum, and leather bindings. He is also a maker of archival enclosures, according to information on the studio’s Facebook page.

Richards currently works at the University of Oklahoma library, and he has made book-binding more than just a hobby: To him, it's an artistic movement, a career, and a passion. He studied in Germany and the Czech Republic to hone his craft.

At OU, Richards even had a hand in restoring a text by Galileo himself. The piece is valued at over $2 million.

In a discussion with “Books Tell You Why,” a company that sells antiquarian books, Richardson said his love for rare books and binding came from weekend “antiquing” trips with his parents – and from receiving a catalogue of rare books from the post office by accident.