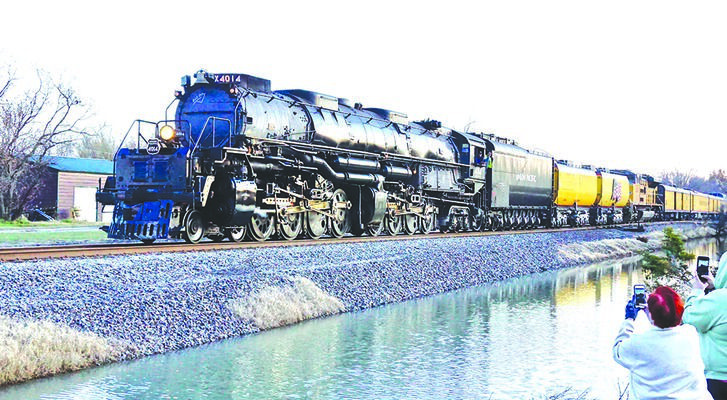 In Coffeyville, history passes you by – on a set of cold steel rails.

On Nov. 16, hundreds of train enthusiasts from across the southern U.S. trekked to this small Kansas town to watch the world’s largest steam locomotive chug down the tracks.

According to Union Pacific, No. 4014 is the last operational Big Boy unit in the U.S. The company once owned 25 of the engines, seven of which are now on static display at museums around the country.

No. 4014 was put in service in December of 1941. It was retired 20 years later, having traveled over one million miles. In 2013, the railroad purchased the unit back from the RailGiants Museum in California. The engine was relocated to Cheyenne, WY to be restored, and it was put back in service in May of this year to celebrate the 150th anniversary of the Transcontinental Railroad’s completion.

As part of the locomotive’s Great Race Across the Southwest, Big Boy rolled through towns in Oklahoma and Kansas on Saturday, where spectators anxiously awaited the arrival of the roughly 600-ton machine.

Luke Benzinger, a 14-year-old train enthusiast from St. Louis, MO, came to Coffeyville with his father to see the train he had dreamed about since he was a little boy.

Benzinger, a self-described “old soul,” said the locomotive’s nearly 6,000-horsepower engine was the most impressive part of the train.

“It’s just fascinating,” he said. “If you didn’t go, you probably missed out on one of the greatest experiences that you’ll ever see.”

The sentiment that seeing Big Boy was a great experience was not uncommon.

Coffeyville native Monroe Joplin said seeing Big Boy was a “once in a lifetime” opportunity.

The U.S. Navy veteran said he has seen two of Union Pacific’s three largest historic trains, both of which ran through his hometown in the last few decades. But once Big Boy’s 68” wheels rolled past him as he watched from a field near the tracks, Joplin was able to check-off the last item on his train-watching bucket-list

Before No. 4014 pulled into town, Joplin said he couldn’t fathom the size of the locomotive.

Then, the engine’s low-pitched whistle let out a long, thunderous blow, and a dark trail of thick, black smoke came billowing out of the smoke-stack.

Like many others, Joplin greeted the mechanical marvel with cheers – and with tears.

“Words … well, it almost makes you want to cry,” Joplin said with watery eyes. “Once in a lifetime. … It was well worth the wait.”

Train lovers viewing the locomotive on the ground had a good view of the engine’s moving parts; side-rods slammed back and forth as the shiny black engine pierced the blue hue of the evening sky.

But even though the men and women cheering on the ground had an exciting view of the mechanical masterpiece’s movement, none of them had the view Tanner Morgan had.

Morgan was one of the lucky souls who was able to climb aboard the long, black train for a ride in the cab. He and his father, Oklahoma News Channel 4 meteorologist Mike Morgan, took turns riding the rails that day. At each stop, the elder Morgan and the younger Morgan would swap places. One would take the train, and the other would follow it to the next stop with the family car.

Tanner Morgan first boarded Big Boy in Sallisaw, OK, allowing him to get in a fair amount of track time before he reached Coffeyville. He said the locomotive runs “like a Swiss watch” and that the ride, overall, was “smooth.”

“It didn’t break a sweat, really,” he said. “It rode pretty comfortably.”

The locomotive’s top speed that day was roughly 50 miles per hour.

“Getting to talk to Ed is even more significant,” he said. “He’s such a nice guy, and he’s a real rockstar.”

For Tanner Morgan, riding in the locomotive was a “privilege.” Blowing the train’s whistle was an even bigger one, he said.

He picked one word to describe the experience: “Outstanding.”

“The engine has such a legacy,” he said. “It’s pretty humbling to be near one operating.”