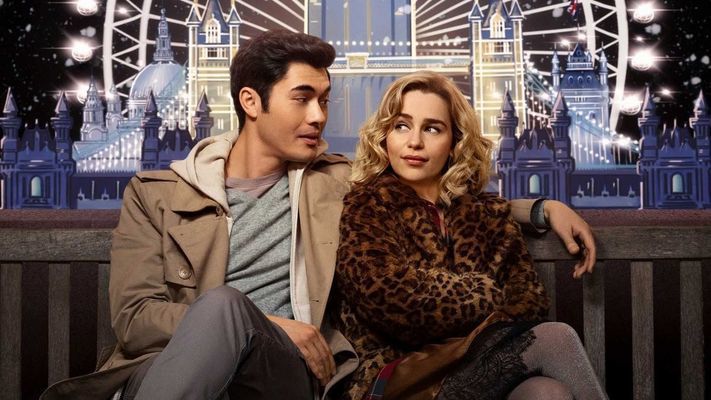 “You were always going to have my heart, one way or another.”

Paul Feig's LAST CHRISTMAS, based on the music of George Michael, opened this month and is a bittersweet, wholesome blast of Yuletide tearjerking and festive feels that could proudly be placed alongside another London-set great like LOVE, ACTUALLY without batting an eye.

Set in 2017, we're introduced to the down and (not quite) out 26-year-old Kate played by a bubbly and charismatic Emilia Clarke (Daenerys from Game of Thrones) who is a struggling actress/musician obsessed with the late George Michael, and fated to seemingly disastrous decisions. Kate, as it happens, is an elf in a downtown London Christmas store, employed by the snarky “Santa” herself, played by Michelle Yeoh.

While Kate's life seems doomed to self-loathing and vagrancy, one day at work she meets the enigmatic Tom, played by a delightful and giddy Henry Golding (CRAZY RICH ASIANS break-out) and her life begins to turn upside down as she begins to “look up” and see the things she never noticed before.

The film is a passion-project for Emma Thompson (Harry Potter, Men in Black) who wrote, produced, and crafted the story based on George Michael's 1984 pop song “Last Christmas”, and it owes more to a wholesome episode of The Twilight Zone such as “One for the Angels” or the Christmas themed “The Night of the Meek” rather than a straight-forward romcom, but to divulge anymore would be spoiler-y.

Henry Golding, a delight on-screen from 2018's aforementioned CRAZY RICH ASIANS is making his case for the next leading man in Hollywood quite powerfully, and his eccentric dancing, wry smiles, and casual glances make him easy to fall for, alongside Emilia Clarke's Kate, who has tattoos around her fingers, slams beer like a sailor, and lives (literally) out of a metal suitcase.

Clarke has played romantic leads ranging from dastardly (Game of Thrones) to misunderstood (SOLO) to sugary-sweet (Me Before You) and her role here takes great ques from all three, plus allows us to hear her sing quite frequently, making me think someone is going to snatch her up for a musical remake soon. These two make LAST CHRISTMAS easy to love, and that much easier to cry at as the film winds down.

Feig, who has directed hits like A SIMPLE FAVOR, several episodes of “The Office”, BRIDESMAIDS, and 2016's GHOSTBUSTERS is a natural at weaving drama and comedy, and playing to audience's strengths and weaknesses. There's several great visual gags here and aesthetically Director of Photography John Schwartzman, who has worked with Michael Bay, Marc Webb, and others, gives us a warm, rich looking film that looks delightful enough to live in.

At it's heart- and there's a big, beating one here both literally and figuratively- LAST CHRISTMAS is unapologetically happy film. Tom teaches Kate to start thinking about others alongside her self, not sacrificing one for the other. He begins to show her the beauty of stopping to look at the world, and we see her grow morally as a person. It's an old-fashioned and tasteful film that reminds us beautifully about the true meaning of the Holidays.

There's of course a wider sentiment here about acceptance- of race, culture, economic class, and sexuality- and it's hit with just enough strength to matter but not enough to turn the film into something that replaces Holiday cheer with political grand-standing and eye-rolling.

LAST CHRISTMAS is a cheerful ode to why we love Christmas movies, and that no matter how bad things seem there's always a chance to do some good, and to look up every once in a while to see things we might not have noticed before.