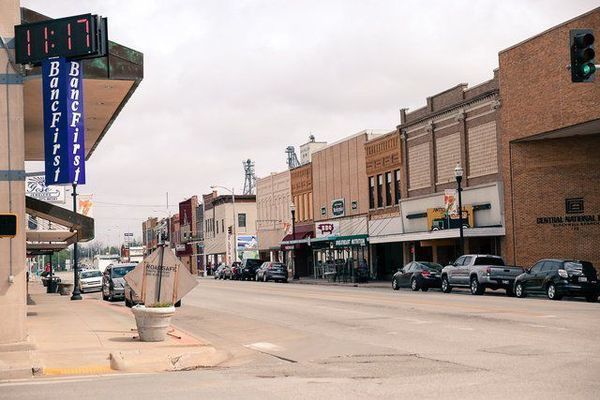 After the introduction of Rosato, Melissa Hudson spoke on behalf of the Top of Oklahoma Museum. She thanked the City for the new Christmas tree that was erected on the Museum’s lawn last week, saying it was “beautiful.” The Museum Board plans to decorate for the holidays this weekend, she said, and added that Board members planted more than 400 flags on the property for Veterans Day earlier in November.

The first item of business for the Council was approval of amendments to the Fiscal Year 2019-2020 budget, and the second was approval of amendments to the Oklahoma Municipal Retirement Fund (OMRF), which is where the City pays it’s employees retirement benefits. The changes were described by City Attorney Bryce Kennedy as mostly “definitions”, along with some changes coming from the IRS. The main item was that any City employee charged with bribery or embezzlement would not be eligible to receive his or her retirement pension and benefits. Kennedy jokingly advised a “Note to employees…Don't steal.”

The next agenda item considered was the agreement with the Stillwater Medical Center Authority to lease and operate the Blackwell Regional Hospital beginning January 1, 2020.  Under the agreement, Stillwater Medical would take over management and operations of the hospital for the next seven years, taking any losses that would come with the hospital. Also included in the agreement is the requirement for new construction and remodeling to some areas of the existing structure that will remain. Essentially, this agreement “secures the hospital’s future”, according to Kennedy, and the cost to the public will stay the same. Currently, the Hospital Sales Tax and the BPT Medical allocation received monthly, pays for costs associated with keeping the Blackwell Hospital open and running.

The next item considered was for approval of recommendations from the City’s ‘Planning Commission’ to fund $100,000 for the purchase of property located behind the site where Dollar Tree will soon be built. This property will ensure that Dollar Tree will have better access to the rear of the property for truck deliveries, and the City will be provided ingress and egress for electric, water, and sewer utilities and infrastructure.

The Council also approved the Planning Commission’s recommendation for the allocation of $70,000 for the Main Street Beautification Program. The plan is for the City to encourage Main Street property owners to improve the aesthetics of Blackwell's downtown through grant funding for projects that could include work on facades and roofs. The Council also approved the Commission’s  recommendation of allocating $67,000 towards the Top of Oklahoma Museum’s Renovation Bid that will be awarded in the near future.

All three projects recommended by the Planning Commission and approved by the City Council, will be paid using BPT monies from the Private Projects Fund. According to the Blackwell Public Trust (BPT) Indenture, any funds used out of ‘Private Projects’ must first go before the Planning Commission prior to coming before City Council. The total allocation for all three projects is $237,000.

Next, Code Enforcement Officer Jerry Wieland spoke to the Council about the bids received for the removal of dilapidated structures. The Council approved the his recommendation to award the contract to Alva-based Level Excavation, LLC., for four dilapidated structures to be demolished at a cost of $23,975, and funding will come out of the BPT Community Enhancement fund.

The Council also approved an agreement with American Ramp Company for the purchase, delivery, and installation of skatepark facilities for $178,000. Funds for the project will come from the Recreational Sales Tax fund. The item was unanimously approved.