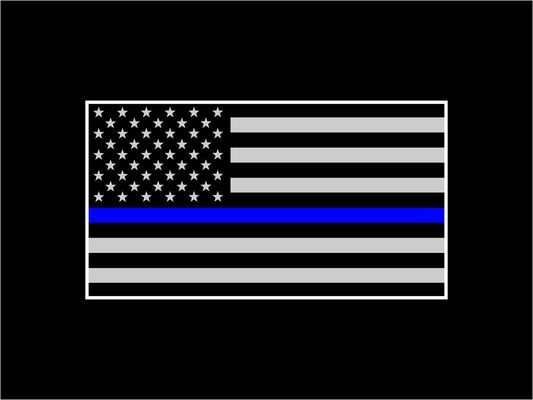 In the court of law, John Mitchell has been indicted on a count of second-degree murder. But in the court of public opinion, he’s been called a hero.

Mitchell, a lieutenant with the Blackwell Police Department, was indicted by the Seventeenth Multicounty Grand Jury of Oklahoma in late November on a charge stemming from a May 20 incident in which Mitchell allegedly shot and killed 34-year-old Michael Ann Godsey.

That morning, Godsey allegedly drove around Blackwell while shooting at cars and other objects. When police officers tracked the woman down, “shots were exchanged” between the shooter and more than one law enforcement officer, according to the Oklahoma State Bureau of Investigation.

Mitchell was one of those officers. And now, more than half a year later, he’s being charged in what may be one of the first cases of its kind in the history of the United States: A case in which a police officer has been charged with murder for killing an active shooter.

HOW THE CHARGES CAME ABOUT

Following the May shooting, the OSBI started its own investigation into the case.

Kay County District Attorney Brian Hermanson recused himself from the investigation. That’s because, as a law enforcement official himself, he’s worked with Mitchell on numerous occasions.

Since Hermanson recused himself, the case had to be handed off to another district attorney. That attorney is Jason Hicks, who serves the southern Oklahoma counties of Caddo, Grady, Jefferson, and Stephens. He’s the one who brought the charge before the grand jury.

The Journal-Tribune has made numerous attempts to contact Hicks at his various offices, but those calls have yet to be returned.

INDICTMENT: WHAT IT SAYS – AND WHAT IT DOESN’T

The grand jury’s indictment was filed in Kay County District Court on Nov. 22. The indictment alleges that Mitchell “feloniously committed” murder in the second degree when he shot 60 rounds at Godsey, killing her. An alternative charge – manslaughter in the first degree – was also listed in the indictment.

The grand jury said Mitchell’s actions were “imminently dangerous” and were “without justifiable cause or excuse.”

But the indictment does not say that Godsey shot at law enforcement, and it does not describe her as an active shooter. It only says that Mitchell was “resisting an attempt by Michael Ann Godsey to commit a crime.” Why information about Godsey’s actions was omitted is unclear.

It is unknown if any other errors were or were not made in the indictment. As previously reported, Hicks has not returned the Journal-Tribune’s calls. But while Hicks has yet to state his side, Mitchell’s defense attorney has taken the opportunity to publicly vouch for his client.

Mitchell made his initial appearance in Kay County District Court on Nov. 25. But even though the hearing was mostly held for procedural purposes, it provided Mitchell’s defense attorney, Gary J. James, with an opportunity to make a case for the officer’s character.

Mitchell’s bond was initially set at $150,000, according to those present at the hearing. James filed a motion to reduce that amount to $10,000. Judge Turner released Mitchell on an OR (Own Recognizance) Bond.

In the motion, James provided a detailed biography of Mitchell’s life, describing him as a man with “significant family ties” and an “impeccable” reputation.

James listed off several civic organizations of which Mitchell is a part, including Kara’s Game, a program that allows children with special needs to participate in sporting activities. The attorney also listed off four awards that Mitchell has received for his law enforcement work, two of which he received this year. In July, Mitchell received the Investigator of the Year Award from the Association of Narcotics Enforcers for Region 5, an award he previously won in 2011. He also received the Presidential Award for Excellence in Rural Drug Enforcement from the Association of Narcotics Enforcers.

“There are a number of members of the community willing to vouch for the Defendant’s reliability if so required by the Court,” James wrote.

But those community members aren’t waiting for a court hearing to state their views about Mitchell. They’re harnessing the power of social media to drum up nationwide support for the embattled officer.

It all started with a hashtag: “#justiceforjohn.”

In the days since Mitchell’s indictment was handed down, a Facebook group named “We Stand By John Mitchell” has sprung up. It’s become a place where Mitchell’s supporters can offer words of encouragement to the officer and his family. Across Facebook, Blackwell-area users have posted pictures of “the thin blue line,” a widely-recognized symbol of solidarity with the law enforcement community.

As of press time, over 6,000 people from across the country were members of the group.

Statements of support posted on the social media platform aren’t the only forms of support the officer is receiving, though. Some of Mitchell’s allies have started selling t-shirts and automotive decals featuring the phrase “#justiceforjohn.” Adult-sized T-shirts cost $20 each, and youth sizes cost $15 each. Decals cost $10 each.

Ingram is the vice president of the Blackwell Fraternal Order of Police, the union representing the city’s police officers. When he spoke to the Journal-Tribune one week ago, he said he had already sold over 100 shirts. Proceeds from the purchase of shirts and decals will be used for “outreach support” for the case, Ingram said.

Those interested in purchasing any of the items may visit the police department and ask to speak with a member of the FOP. They may also contact the FOP via the organization’s Facebook page, named “Blackwell Fraternal Order of Police Lodge 183.”

Ingram said he has seen an “overwhelming” amount of support for Mitchell – even from citizens from whom he did not expect to see it.

Speaking to the Journal-Tribune the day after the bond hearing, Ingram said: “The support has just been overwhelming. I’ve been flooded with phone calls and messages [from] people that I really was surprised are supporting him. Just in the last 12 hours, I’ve already had over 100 people ordering shirts to show their support for John. It’s been very overwhelming.”

The shirts, Ingram said, will help spread the group’s goal: “To get 100% justice for John.”

Even though Mitchell is the indicted officer, the case may affect others behind the badge.

The next time Ingram is in a life-threatening situation as a police officer, he’ll be thinking of Mitchell.

For him, the indictment calls into question what law enforcement officers are expected to do when they come face-to-face with an active shooter.

“It’s really hard because we care for John,” he said. “It also makes us feel like, ‘You never know what’s going to happen when you have to do your job.’”

“It’s a very unjust indictment,” he added. “It could possibly make officers hesitate and … maybe cause an officer to get hurt or lose their life because of this.”

Ingram said the indictment won’t affect how he responds to situations he’s faced with as a law enforcement officer, and he hopes the same will be true for others.

“I hope that it won’t change anything,” he said. “I hope I’ll respond in any manner necessary. In the back of my mind, I’ll always think about John and his situation, but I hope it does not change me or any of fellow officers on doing what they need to do.”

Kasey Cox and her family have lived in Blackwell since 2013, when her husband started working for the Blackwell Police Department. They moved to town, and the Mitchells became some of their first friends.

So when she first heard the news of the indictment, she was stunned.

“I was speechless,” she said. “My stomach rolled. I couldn’t even believe this happened. In the six months it’s been taking … we just thought, ‘OK, this guy’s not getting to it yet.’ And then all of a sudden, second degree murder. It’s low.”

Cox said she feels that Mitchell did “everything he could” to protect the community by stopping the shooter. She also hopes that his indictment won’t send a negative message to other law enforcement officials.

“I 100% believe Officer Mitchell did everything he could to protect himself, the other officers, and his community that night,” she said. “And I hope none of our other law enforcement agencies or officers … let this situation make them second-guess themselves. I hope they do what they are trained to do.”

Cox said that her family and Mitchell’s family have experienced several different emotions since the indictment was released. Among them: Stress, anger, sadness, and depression.

“John and Rachel and the kids are like family to us, so we feel everything just like they are,” she said.

Cox said she feels that the district attorney is trying to “target” Mitchell and “make a name for himself.”

“I don’t know if that district attorney needs a huge case to get his name out there or what,” she said, “but he picked the wrong town.”

Shortly after the indictment was handed down, Oklahoma Fraternal Order of Police President Jason Smith issued a fiery statement to police officers across the state about the indictment, calling the maneuver a “miscarriage of justice” and accusing Hicks of “trying to make a name for himself.”

“Here is the rub, I was told that the OSBI investigated the shoot and ruled it justified, his department investigated the shoot and ruled it justified, but this was not good enough for a DA trying to make a name for himself,” Smith wrote. “Hicks is the DA for Stephens, Grady, and Caddo Counties. Hicks waited for the last over six months refusing to make a decision until this week where he took the case to a grand jury.”

Smith said the FOP will pay for Mitchell’s legal defense, and he said the national FOP will help launch a media campaign to “call out Jason Hicks for what he is.”

“This is a miscarriage of justice and we need to come together as a profession and condemn activist district attorneys from destroying the lives of our heroes like John, ENOUGH IS ENOUGH. … Brother John Mitchell, you are one of the finest, most honest, dedicated law enforcement heroes I have ever worked with. [N]one of us can remove this burden tonight, but go to sleep knowing this. WE GOT YOUR SIX BROTHER!”

In a later interview, Smith said he has been unable to find another case in which an officer has been charged for killing an active shooter.

In a statement released the following day, Blackwell City Manager Janet Smith (who is not related to Jason Smith) said the city will leave Mitchell on paid administrative leave. She also said the city will cooperate with the district attorney’s office in regard to the indictment.

“Our community grieves for and with everyone affected by this incident,” she said.