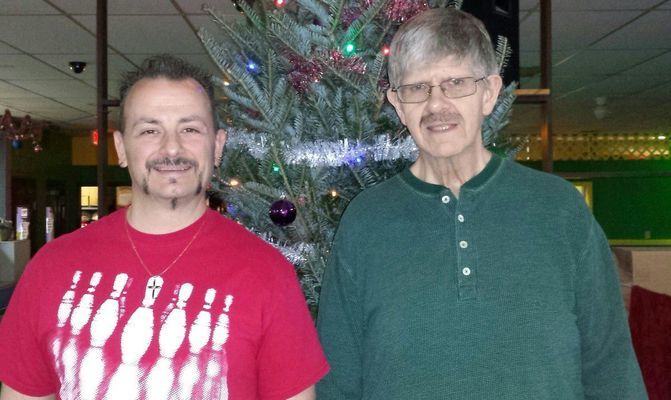 Keith was a supply specialist in the U.S. Air Force. According to Lucas, Keith was responsible for starting several bowling leagues from scratch in overseas countries. Those leagues, including one of the first recorded bowling leagues in Thailand, are still standing today.

“He was even the winner of the Worldwide Military Singles Championship,” Lucas added. “When he got out of the Air Force, he took up coaching, which is where I met him, in Alexandria, Louisiana. I had grown up bowling, you know. I was ‘so-so,’ and he was running an alley out there. I remember he was running a tournament and I asked if I could bowl. He asked my average. I told him at the time it was about 137. … Then he asked if I ever considered going ‘pro.’”

“I was 19,” he said. “I just smarted off to him, you know, like, 'Oh yeah, that's my dream.’ But he was serious. He said he'd coach me, and the only thing he wanted in return was recognition, so that people knew his name. And from then on, he was my coach, and would be my life-long friend.”

Lucas was still in the Air Force at the time. He would travel to Dallas, TX when he had time to visit Keith, up until he relocated to a bowling alley in Lexington, VA. Keith offered Lucas a job when he left the Air Force, and Lucas admitted he was nervous.

“I knew nothing about how anything worked. Like, anything at all,” Lucas said. “I didn't even know how to work a cash register, let alone what went into making a bowling alley run. And everything fell into place.”

After taking the job, Lucas and Keith partnered with a close friend and became known throughout the east coast for “flipping” struggling bowling alleys. According to Lucas, the trio would identify struggling locations, come in, and within a short amount of time, turn the businesses into successful hot-spots.

After establishing themselves, the three ended up in Bonesteel, South Dakota, where they had essentially been given a failing alley.

“In a town of 375 people, we turned that six-lane alley into such a huge success that we attracted the attention of the Nebraska Bowler Magazine,” Lucas said. “In a town of less than 400 people, we had over 200 league-level bowlers.

“Then we had our next calling. Then we came to Blackwell in the early 2000s.”

Lucas said they found Blackwell's alley in Bowling Journal Magazine. Keith called to inquire about it – despite the fact that the issue was nearly a year old. Fearing they had lost it, they prepared for the worst – until Keith was informed that the site was still for sale.

“This place had the space we wanted and the equipment we needed, and we've been here ever since,” Lucas said. “Ron and I have put a ton of time and money into this alley, and we've seen it grow and become extremely popular in the past 10-15 years.”

Lucas said Keith’s passing was extremely hard to handle, both for himself and for the community.

Lucas posted on the Lucas Lanes Facebook page: “Thank you for all of your prayers and support through all of this. We will have a celebration of his life get together soon. Details will be posted as soon as we can make all of the arrangements. In lieu of flowers and cards, please make a donation to your favorite local charity or any Veterans organization in Memory of Ron. Thanks so much again, for everything.”

“His passing hit me harder than my own father's,” Lucas said. “He will be missed. He would see someone, and just talk to them, make them feel welcome. It's not the same now, and I don't think it will be the same at Lucas Lanes without him. … But we're going to keep going. We're getting more league bowlers this year than we had recently, and I think the future is looking bright.”