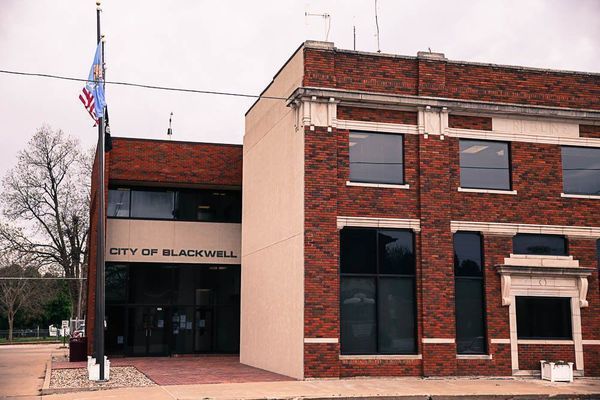 The Blackwell City Council met last week and approved a new project designed to spruce up the town in time for the holidays.

The meeting began with Mayor T.J. Greenfield recognizing the passing of Max Wirtz, Blackwell’s former mayor. Wirtz passed away last week. Councilman Jon Webb spoke, saying that Wirtz was “missed” and that he “appreciated all that he did.” Greenfield extended the city's thoughts and prayers to Wirtz's family.

Next, City Manager Janet Smith and Water Department Manager Jim Hoos presented the Employee of the Month Award. It was awarded to Michael Anthony for her “expedient service” at a Blackwell residence. When a resident called to report that her water was brown, Anthony responded by flushing out a nearby fire hydrant in order to clean out the water lines. The timeliness of Anthony’s response led to a positive post on a community Facebook page, with the author praising Anthony and the water department.

“[Michael] has been with us since May 2019,” Hoos said. “She came in fresh. … She has learned a lot since she's been here. She can be used wherever she's needed, and that's her strength. She's learning a lot. … She's an incredible operator.”

After hearing from city department officials, the Council approved the city of Blackwell's 2020 municipal meeting schedule.

The next item on the agenda was to award a bid in the amount of $311,612.00 to Seacoast Roofing & Construction for the Top of Oklahoma Museum Renovation Project. Funds for the project will come from the Blackwell Public Trust Capital Improvement and Private Project Fund. The museum, located on South Main St., has faced several years of water damage to its roof and walls, mainly on its iconic dome.

After awarding the bid, the Council approved Ordinance 2019-25, which deals with subdivision regulations and codifications associated with developed properties, lots, and lot-splitting.

Following that discussion, the Council approved a funding request from the Blackwell Tourism and Development Board for a two-year contract in the amount of $6,600 per year for a 12’ x 40’ billboard to be installed on Interstate 35. The sign will advertise as many attractions as possible including, Blackwell's geocaching, barn quilt trail and the TOHS Museum. Money for the project will come from the city’s lodging tax, which is levied on the rental of hotel and motel rooms.

The Council then heard from the Tourism Board on the “Gussy Up the Town” project. The board requested $2,500. The goal of the project is to enhance the community during the holiday season. Up to 10 teams, comprised of individuals, businesses, and organizations, will receive up to $250 each. That money will be used to purchase décor and supplies needed to decorate Main Street businesses or selected city parks. The funds will come from the city’s Community Enhancement Fund.

Cindy Oard, a member of the board, said the board has decorated the windows of various unoccupied buildings on Main Street in the past. She said the new project would be a chance for youth groups and other organizations to put their touch on the city of Blackwell. Smith said it was a great idea and has been used in other Oklahoma cities.

With no further business, the Council adjourned at 7:30 p.m.