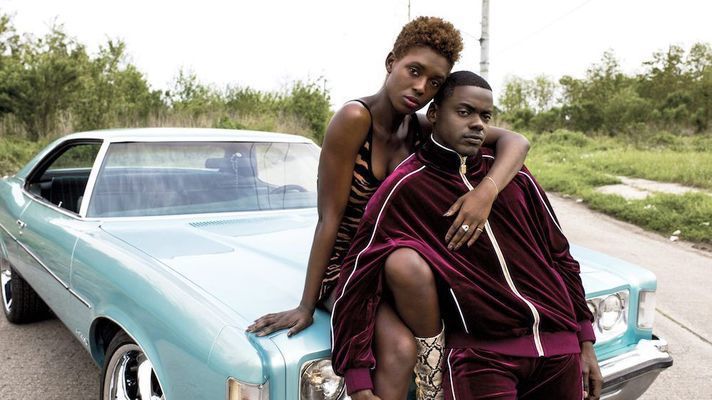 Melina Matsoukas' directorial feature QUEEN & SLIM expanded theatrically recently, written by James Frey (A Million Little Pieces) and Lena Waithe (The Chi) and focuses on an unnamed black couple who's online blind-date ends with them on the run.

Opening on a cold wintery night in Ohio, we meet “Slim” (Daniel Kaluuya) and “Queen”, played by newcomer Jodie Turner-Smith. The two met on an online dating app, and are having their first encounter. Slim is a devout Christian who doesn't drink or smoke. A reserved, cautious, type and Queen is a tell-it-like-it-is assertive justice worker. Their playful banter and barbs continue on the drive until Slim's car is lit up by an aggressive white police officer. An altercation leads to cop drawing his weapon and firing on Queen. Slim attacks him in defense, takes his weapon, and fatally shoots him.

Queen, knowing all-too-well what's going to happen to them in the justice system, urges Slim to get in the car and run. Soon, the two become “the black Bonnie and Clyde” and transform from mutual strangers to passionate lovers and, in the eyes of a racially divided America, folk heroes.

QUEEN & SLIM owes a lot to blaxploitation, putting the 1970s sub-genre through the ringer of a dynamic art-house film. It's a joy to watch, and a sure sign that Melina Matsoukas is going to be a force to watch going forward. We see lingering, sometimes eerie and sometimes hopeful, shots of the deep south as the two travel from Ohio down to Florida, making a few stops along the way.

The journey itself is a very “Homerian” one, invoking the same feel of modern fables like “O Brother Where Art Thou” to present a world that is both shockingly relevant and, in bursts, timeless.

Through the course of the film Queen and Slim grow closer as they become larger. Going from prickly strangers on the run, thrust into a world that they had no intention of being in to becoming folk heroes, and larger-than-life lovers idolized, victimized, and ostracized by white America and black America alike.

Their journey takes them to visit Queen's Uncle Earl, an aging war veteran and ex-pimp played with charisma and conviction by Bokeem Woodbine, where the two finally are forced to reconcile with the fact they're no longer people...but becoming ideas. Queen is urged by Earl to shave her head, as her iconic dreads are going to stand out.

Helped by one of Earl's live-in women (played by Indya Moore) Queen's box braids are removed and she's given an androgynous crew-cut. This scene is exceptionally well done, and Queen and Slim become new people. Icons. In a rush to leave, Queen dons a black and pink cheetah print minidress with snakeskin boots while Slim suits up in a red velvet tracksuit. Soon, a desperate fan takes a photo of them posed at a small-town garage that instantly lights up social media. The two are printed on t-shirts, shared online, and become bigger than themselves...while still managing to fall in love.

Their lives ignite nationwide protests and movements, especially when news breaks that the officer they killed in Ohio was previously investigated for murdering an unnamed black man earlier in the year.

The film's political and romantic threads reach their ultimate knot in a beautiful sex scene between Queen and Slim that is intercut between loud, vicious, chants and marches at a political protest in honor of the two. These icons are being fought for, while the real flesh and blood behind them are mingling in a passionate display of intimacy.

They never wanted this life- they just wanted each other. There is a lot of talk about legacy, about justice, in QUEEN & SLIM, but the ultimate message of the film speaks beyond that and makes us realize the ultimate war in and out of ourselves is public and private perception. Who are we to them, who are we to each other...and what is our legacy?