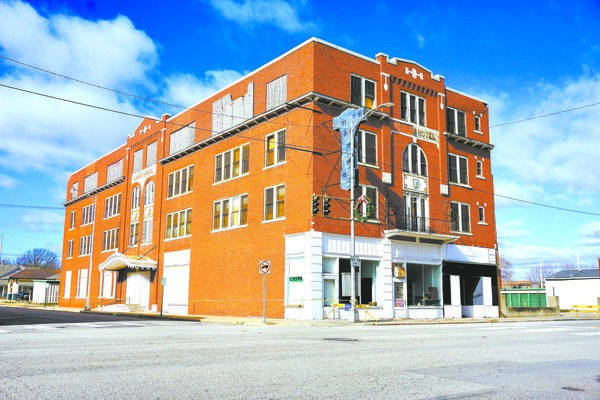 What’s up with the Larkin Hotel?

The windows have been boarded up, and barricades have been placed in front of the building. It’s a change from the way the scene looked just two years ago, when there was talk of restoring the historic structure and turning it into a low-income housing complex.

This week, The Journal-Tribune tried to find out what the plans are for the old Main Street hotel, which once hosted the likes of famous oilman E.W. Marland and world-renowned aviator Amelia Earhart, according to local legend.

Those plans, at best, are opaque.

Here’s what we know.

It started with barricades.

Earlier this year, the city blocked off the sidewalk in front of the Larkin because bricks were falling off of the building’s forlorn facade.

Then windows were broken, allowing animals and people to enter the building.

Blackwell Code Enforcement Officer Jerry Weiland said the city boarded up the windows in November after the property owners failed to respond “in a timely manner” to a letter the city sent them, telling them to secure the property.

But around the time the city began sealing up the windows, a contractor for the owners showed up. The contractor told city officials that the owners planned to do “something” with the building. No further details were provided.

Until the owner makes the next move, the building is “just kind of sitting there boarded up,” Weiland said.

So that begs the question: Who owns the property?

That address is home to Summit Housing Group. According to the company’s website, Summit is a “growing development company” specializing in “low-income tax-credit and mixed-use developments.” The company said it has “built, been awarded, or has under construction” 32 properties in Montana, South Dakota, Utah, Nebraska, and Wyoming. There’s no mention of any properties in Oklahoma.

The company says it works to “ensure quality affordable housing throughout US.”

The Journal-Tribune made several attempts to contact the company via phone Monday, but those calls had not been returned as of press time.

HISTORY OF THE LARKIN

The Larkin was added to the National Register of Historic Places in 2013. So even if the building isn’t being preserved, its history is.

The National Park Service compiles in-depth reports on the history of each building listed on the National Register. The Larkin’s was detailed in 29-page document. According to the NPS, the Larkin was the first four-story building in Blackwell, and it was the town’s first “modern” hotel. J.M. Fuller, a Kansas architect, designed the building. It was under construction from 1923-1924.

The building was named after John P. Larkin, a “reportedly experienced and successful hotel man from Larned, Kansas,” according to the NPS. Larkin financed the hotel’s construction.

To build the hotel, Larkin purchased the property that the hotel sits on for a total of $12,000 in March 1923. The Blackwell Commercial Club, an early form of the Chamber of Commerce, reimbursed Larkin for the cost of the site, according to the NPS.

“Although the $12,000 bonus was noted as a being ‘considerable,’ the long-felt need for such an establishment in Blackwell was deemed worth the price,” the NPS wrote.

The Blackwell Morning Tribune – which later became The Blackwell Journal-Tribune – reported that the hotel held a grand opening May 20, 1924.

The Larkin wasn’t just the first tall building in Blackwell; it was also one of the first hotels of that time period to have both hot and cold running water and a telephone in each of its 70 guest rooms.

Even though the building has played a part in Blackwell’s past, its future is less than certain. The property was included on Preservation Oklahoma’s 2012 Most Endangered Properties List. According to the NPS, that was done because of the “precarious status of the building due to lack of use.”

The building’s decline is reflected not only in its appearance, but also in its property value. The county assessor’s office has given the four-story building a total market value of $28,500, according to online property records. Thirteen years ago, the building was sold for $200,000.

Whether the Larkin ever serves as a housing complex or not, one thing is for certain: It will always be a cornerstone of the community.

“As the first four-story building, the first modern hotel in Blackwell ... the Larkin Hotel represents a unique advancement in Blackwell’s community planning and development,” the NPS wrote. “Architecturally, the building is a distinctive landmark in downtown Blackwell. While not in use and exhibiting signs of neglect, the Larkin Hotel nonetheless retains its historic integrity and ably conveys its historic and architectural significance to the Blackwell community.”