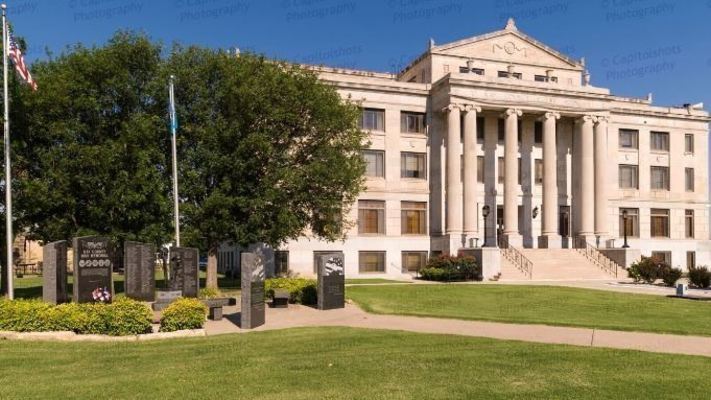 For most of her life, Ashlee Tollett kept a secret to herself.

When she was a child growing up in Blackwell, it was normal for her father to sexually abuse her, she alleges.

And anytime she tried to resist her father's actions, it was normal for her father to say, “You never show your father any physical affection,” she alleges.

She kept those allegations and more to herself until June 10, 2019. On that date, Tollett, the daughter of two Kay County educators, learned that she was not alone: Other people had allegedly been abused by her father and his “sinister lurking presence.”

Tollett, the daughter of longtime Peckham Public Schools Superintendent Gary Young, has filed a groundbreaking lawsuit against her father in which she seeks “redress and remedies” for “childhood sexual abuses” she allegedly endured at his hands.

Tollett, 38, filed the lawsuit in the Western District Court of Oklahoma Dec. 18, the same day her father made his initial appearance in Kay County District Court on six felony charges related to allegations of sexual abuse against children and at least one employee of his former school district.

Cameron Spradling, the woman's attorney, said the lawsuit will be the first one tried under Oklahoma's Hidden Predator Act, which was enacted in 2017. Under that law, sexual abuse victims may file charges against their aggressors until the victims turn 45.

In the years since her alleged abuse, Tollett says she has suffered “psychological and emotional injury and harm” and “long-term psychological injuries.”

Her attorney has demanded the case be tried by a jury, which will determine how much she should be awarded. Her attorney believes that amount could be “millions” of dollars for the alleged “life threatening” abuse she endured.

That abuse allegedly began when Tollett was 3.

Tollett alleges that her father would “brag” about firing a babysitter whom he called “crazy” after the babysitter told Young's wife that Tollett “regularly masturbated.” The babysitter was “fearful” that Young was abusing his daughter, who was 3 at the time, the lawsuit alleges.

“These events would be so forceful and aggressive that the attack would give Ashlee no time for escape,” the lawsuit alleges. “These attacks would be followed by Gary Young raucously laughing and he would then guilt Ashlee with comments such as, 'you never show your father any physical affection,' you never liked it when I touched you,' and 'you won't let me touch you.'”

“As Ashlee went through puberty,” the lawsuit said, “her disgust and embarrassment towards her father grew.”

But Young was “undaunted” by his daughter's “rejections,” so he “schemed, contrived, and tricked Ashlee into another method that allowed him to touch (her),” court documents allege. He began offering his daughter, an athlete, “sports massages” to “loosen up.” Tollett would allegedly lay on the floor while Young would rub her legs “very methodically,” commenting on the “physicality of her legs.” It wasn't until Tollett was an adult that she realized her father had been engaging in “sensual foreplay,” she alleges.

During Tollett's middle school and high school years, her father would allegedly walk through his home in “nothing but underwear or just a towel,” revealing his “pubic hair and the sides of his genitals.” This happened even when Tollett had friends over, the lawsuit alleges. He would also allegedly call Tollett and her friends into his bedroom, where he would be lying naked on the bed.

Young also allegedly videotaped his daughter as she dressed herself. Photos used as evidence in the lawsuit show Young pointing a video camera at his daughter while she got dressed for her junior prom.

After she graduated from high school, Tollett went to college, left Oklahoma, got married, and had four children.

In June 2019, her family was moving from Overland Park, KS to Florida when they stopped in Blackwell to see her parents. During this visit, Tollett alleges she had another uncomfortable and inappropriate incident involving her father.

“The entire interaction and exchange hearkened her back to the past,” her attorney wrote in the lawsuit.

After the family left the home, Tollett told her husband about her alleged childhood abuse. That's when she found out that she was not the only victim, the lawsuit alleges. She and her husband contacted the Blackwell Police Department and obtained a police report from 2015, where a minor who was babysitting at Young's home claimed that Young “started rubbing her shoulders and she became very uncomfortable.”

Tollett later confronted her father via text about the alleged abuse. A photo of Young's alleged text messages is included as evidence in the lawsuit.

In a text message he sent to his daughter, Young allegedly claimed “full responsibility.”

His first text: “Hi Ashlee, I do want you to know that I love you and I am sorry that I hurt you!”

His second text: “I do want you to know that I am going to correct my problem. I was wrong and I am sorry it happened. I take full responsibility.”

Spradling has made a career by representing sexual assault victims. But for him, this case will be unlike any other.

Spradling helped state legislators draft the Hidden Predators Act, and he'll be the first attorney to have a case filed under it.

And according to Spradling, more victims are already beginning to tell their stories.

“A hidden predator has now been found,” he said. “Courage is contagious, and because of the courage of these victims, other victims are now stepping forward.”

With the protections victims have under the law – and with Young on house arrest – Spradling has a message for Young's alleged victims: You are safe.

“He is under house arrest, he has an ankle monitor, he is not allowed to reach out and speak to anybody, and he is going to go through this process and eventually he's going to be put in prison for the rest of his life,” Spradling said. “If you have lived in fear in the Blackwell community of what Gary Young might do to you, you don't have to fear him any longer.”