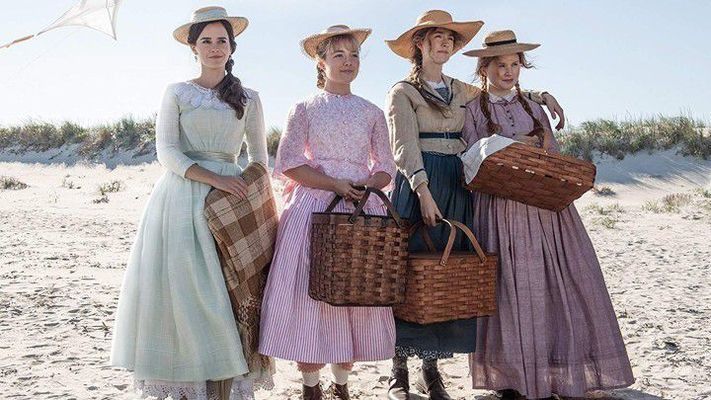 “I believe we have some power over who we love, it isn't something that just happens to a person.”

Greta Gerwig's quick-witted and infectiously joyous adaptation of Louisa May Alcott's quintessential 1868 American novel LITTLE WOMEN debuted in theaters over the Christmas holiday last week, and shows not only the staying power of traditional “Bildungsroman” or coming of age dramas, but the undeniable talent of Gerwig as a filmmaker, which no should have doubted following 2016's marvelous LADY BIRD.

All four sisters live under the wise and knowing eye of their mother Marmee March (a truly delightful Laura Dern) in Concord, Massachusetts waiting for their father (Bob Odenkirk) to return from war. Eventually, the sisters begin to navigate the turbulent waters of romance, adulthood, and more as two of them catch the eye of the rich and eccentric Theodore “Laurie” Laurence, portrayed in heart-melting passion by Timothee Chalamet.

LITTLE WOMEN, from Sony Pictures, is a wholesome film without being demeaning. It is comforting without being coddling, and it defies the expectations for an all-female film in 2019 being a “feminist” film with lessons that can- and should- be applied to any audience member, regardless of gender or age. We see all of the March sisters grow in different ways.

Jo March is chided by Watson's Meg March during one great scene before Meg's marriage where she tells Jo that just because her dreams are different than Jo's- Meg aspires to be a wife, and a mother- that it doesn't make them any less important. Likewise, Jo butts heads with her painter sister (and rival for Laurie's affections) Amy even though both are the artistic types. Amy opens herself up more to criticism and other schools of thought than Jo, who seems to confuse stubbornness and callousness as essential to her womanhood and independence.

When Beth March first comes down with Scarlet Fever we get an emotional (and morally uplifting) exchange between a defeated and exhausted Jo and her mother Marmee where the real talents of Ronan and Dern come out. Marmee explains that she's over 40 years old and that her patience, care, and loving hasn't come to her naturally- it's something that must be worked on and conditioned. Jo is the least affectionate of the March family, but her differences don't put her at odds with her mother, who we're told was quite similar to Jo In her younger days.

This talk, and the reminder of Marmee being like Jo, makes us ponder the argument of domestication versus independence, and why the former seems to have all negative connotations and no positives, while the latter is the opposite. In terms of true independence, the bitter and lonely spinster Aunt March (Meryl Streep) seems to care only about preserving class, remaining alone, and not caring for others. Marmee has retained her nature as a “woman's woman” who is equal to her husband, not above or below him, and it is this measure of equality she attempts to instill in Jo.

LITTLE WOMEN is a knockout film, and will be shown in English classes for years to come once it lands on DVD, no doubt.

The film, thanks to Gerwig's scripting and directing, dusts off a two-century old novel and injects it with contemporary pop and charm that doesn't so much overwrite the original text as it does enhance it.

The production values alone are enough to gawk at, especially the set design and costume work, the latter of which will most definitely be receiving an Oscar for. I can't say enough good things about Greta Gerwig, and I especially am in love with all of her LITTLE WOMEN, which has quickly become one of my favorite films this year.