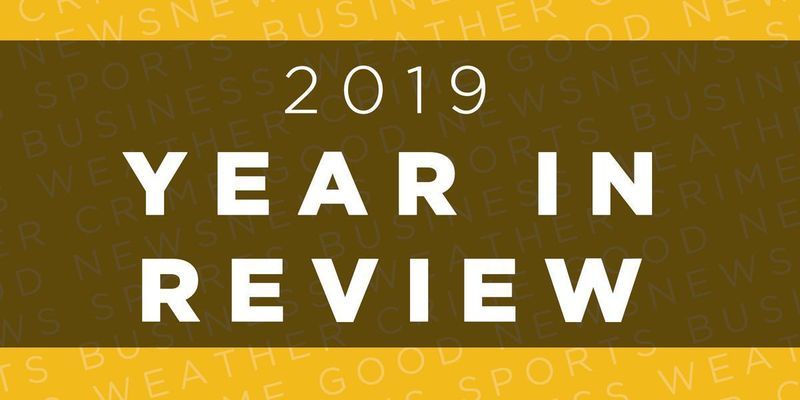 2019 was a whirlwind year for the Blackwell Journal-Tribune.

January began with much-needed roof repairs at Blackwell High School and Blackwell Middle School along with the announcement of BHS's wrestling royalty- but that wasn't the only good news for Blackwell schools, because Stacy McLain's first grade class at Blackwell Elementary got six new Chromebooks as a donation from Dr. Aaron Neale of Blackwell Dentistry. The month began to heat up though when our January 16 issue introduced Janet Smith as the new City Manager for the City of Blackwell, and also included convicted murderer Luis Frias- then still wanted for Janet Reyna's 2013 slaying- who would be featured on John Walsh's new TV drama “In Pursuit with John Walsh”.

January ended with the results from our annual “Best of Kay County” contest along with coverage from the Chamber of Commerce's annual banquet, and a photograph of BHS Vocal's musicians taking state, as well as an emotional dedication of a “Buddy Bench” in honor of Caden Stafford at BES.

February exploded with the front-page revaluation that Luis Frias, featured just a month prior on national television, was apprehended in Mexico where he had fled to. He was extradited to the United States, and had an arraignment and media briefing in Oklahoma City. Brian Hermanson would, a week later, seek the death penalty.

A special City Council meeting attracted a full house in early February when it was believed that newly introduced City Manager Janet Smith was being voted out of office, and another headline grabber was the Blackwell Livestock Auction house under the new management of Lance Cochran as the Southern Plains Livestock Auction.

The month of February closed with Central National Bank becoming “Stride”, Blackwell's 4H and FFA Livestock Show, and a surprise snow storm that saw the smiling faces of two Blackwell kids playing in the winter wonderland.

In March, the first of many dispensaries in the City of Blackwell opened- CCG- as Braman's race for Mayor began to heat up. Blackwell was also featured on the news, as Channel 4's “Is This A Great State or What?!” segment came to visit Blackwell's Barn Quilt trail.

In April, the saga of Luis Frias ended with his sentence to a life in prison without the possibility of parole. Blackwell educators Candi Holt and Julie Lang were recognized that month for District Teacher of the Year and Elementary Teacher of the Year for the Blackwell Public School district.

April was also a huge month for the City of Blackwell, which was recognized by the National Weather Service in Norman as “StormReady”, and saw the grand opening of one of the first-ever geocaching trails to open in Oklahoma. BHS Vocal also won the OSSAA's “Sweepstakes” Honor, marking the first time in history Blackwell won the state's highest choral music award.

April also saw the beginning of a special investigation of improper conduct of city officials which stretched far into November 2019, as well as the FFA Awards banquet and the closing of True Value Hardware.

In May, the City Council signed Janet Smith to a one-year contract just before Kay County received near-record flooding as the result of devastating rainfall that claimed the life of one Blackwell veteran, displaced several families, and permanently damaged Hubbard Road as well as submerging most of Blackwell's north and eastern side in water.

After the rainfall, Kay County was officially declared as a State of Emergency. Also in May, Michael Ann Godsey, 34, was slain in a shoot-out with Blackwell Police in the early morning hours of Monday, May 20. To end the month, Tyson Rowe plead “no contest” in court to 6 counts of embezzlement and nine counts of willful violation of law. Blackwell was still reeling from flood damage, and saw several local churches and the Good Buy Shoppe coming together for victims.

Just when the City thought their flood worries were behind them, June brought the realization that a major break in the City's waterline was causing raw sewage to be dumped into the Chikaskia.

That same week, the Southern Baptists of Texas Convention came to assist with damaged homes from the May floods, and 3 Critters BBQ fed displaced families for free.

Later in June, Blackwell resident Judy Paige was honored by the American Red Cross for giving 25 gallons since she was 16 years old. That same week the City of Blackwell had an extended budget meeting, and Pat McCurry was named the 4th of July Parade Marshal.

June ended with catastrophe as Blackwell's Braum's became devastated by an early-morning inferno that caused the site to close and, subsequently, be demolished to make room for a new restaurant in March 2020.

In July, United Supermarkets was ran into by a driver in the parking lot, smashing out the large window in the front of the building. Blackwell's annual 4th of July parade was held, and an Arizona man, the “Iron Man Grandpa” walked through Oklahoma, stopping in Blackwell, on his journey to raise awareness for first responders.

School resumed in late August for Blackwell kids, just as the City Council approved two SUTU interactive soccer walls to be put in the Memorial Park- the second of which has been installed just last week. Braum's was demolished as well, and the month continued electing a new mayor after the brief stint of Marv Sandbek, the Blackwell Board of Education welcomed Rod Reese as the interim superintendent for Blackwell schools.

August ended with the startling report that Peckham Superintendent Gary Young's licenses were revoked after allegations surfaced of his sexual assault of school employees and minors.

September began with the 102 Annual Kay County Fair and anticipation for Homecoming which saw 4's and 9's returning to Blackwell. Maroon Spirit, Miss BHS, and their runner ups were all named, and Blackwell welcomed Crimson Owl Tattoo Parlor. In mid-September, the Domino Gas Station officially became part of the Casey's General Store family and the Chamber of Commerce welcomed Blackwell alumni Autumn Kincaid as the Director of Tourism.

2019 also marked the first year the City of Blackwell held a Homecoming Block Party at the newly christened Maroon Park on Main Street, formerly known as the Pocket Park. Blackwell's cheerleaders made waves by winning their regional title in Bixby before competing for the State Title at Oral Roberts University.

In October, Ashley Heitschmidt was named Teacher of the Year by the Oklahoma Arts Education Association. Later that month, Blackwell's iconic “Halloween Carnival” made a surprise comeback after it had ended in the early 2010's. The reboot, held at the Event Center, was an overwhelming success. October ended with the 2nd year of the House of Prayer's Craft Show which, also held at the Event Center, was another massive success as reported by attendees and hosts.

In November, the Blackwell Fire Department dedicated their water rescue boat to Larry Larimore, who perished in the summer's floods. The dedication was done at Larimore's church, the Blackwell Church of Christ. Also that month, the City Council officially released the “findings” of the special investigation which was instigated over the summer.

December began with the community rallying around Police Lt. John Mitchell who was, at the end of November, indicted on second-degree murder for Michael Ann Godsey in May.

Also that month, the race for Blackwell Mayor officially began to heat up as former Blackwell Police Dispatcher Glenn Cox threw his hat into the race against current mayor T.J. Greenfield.

What's in store for 2020? No one knows, but the Blackwell Journal-Tribune will be here to cover it.