Red Cross moves into Event Center; Thanks City of Blackwell 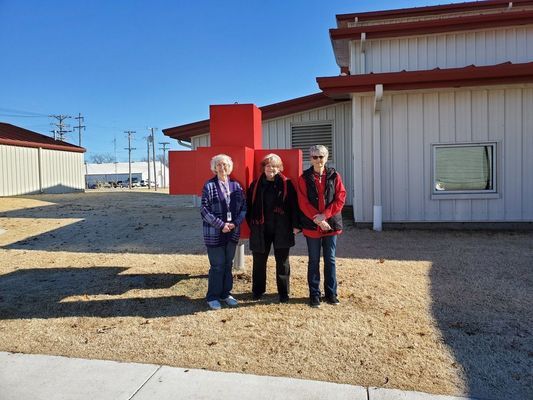 The American Red Cross encourages you to “Give the gift of life” into 2020, and Carol Mullins, Linda Lively, and Barbara Shoemaker all want Blackwell to know that even though their location might have changed from their long-standing home on Ferguson and 13th to the Event Center, their mission hasn't.

In the 1940's the American Red Cross came to Blackwell where it's volunteer services have been felt through almost every natural disaster since, beginning with the 1955 tornado, where the Red Cross turned the Baptist Church into a temporary hospital for tornado victims and displaced families.

“The Red Cross has done so much for Blackwell, so much important work. They're always going to be there. That's why I always say to give blood, because the life you're saving may be your own,” said Carol Mullins, a Blackwell-based volunteer who has been with the Red Cross most of her life.

Since 2007 the Cherokee Strip Chapter has collected 2,862 units of blood which have gone onto help more than 8,568 patients, according to data collected by the City of Blackwell.

“It's not that Blackwell's Red Cross is giving up or shutting down,” said Ponca City Response Service's Linda Lively, “the Red Cross are shutting down their offices with the sole purpose of keeping all of their funding on the cause of helping others. By cutting expenses for overhead and utilities, donations can go directly to those in need. And anyone wishing to donate directly to the Kay County and Blackwell Area are encouraged to go through the Ponca City United Way.”

Barbara Shoemaker then went on to praise the volunteer quilters who finished their final quilt, their 229th one, just recently. They will now be based on Nardin at the Methodist Church.

Currently, the Red Cross only has 4-5 volunteers...and they're in need of more.

“There are so many things someone can do to help,” said Mullins, “we're always in need of able-bodies. Please just come up and ask about volunteering during a drive, or by contacting the Red Cross through Ponca.”

The Cherokee Strip Red Cross's Clara Barton monument will be located to the Top of Oklahoma Museum, and the iconic Red Cross statue has been placed outside the Event Center.

Blood drives will now be held on even-numbered months beginning in February, on the second Tuesday of those months, from noon until 6 p.m. Donors must be over the age of 16 and can only give blood every 56 days.