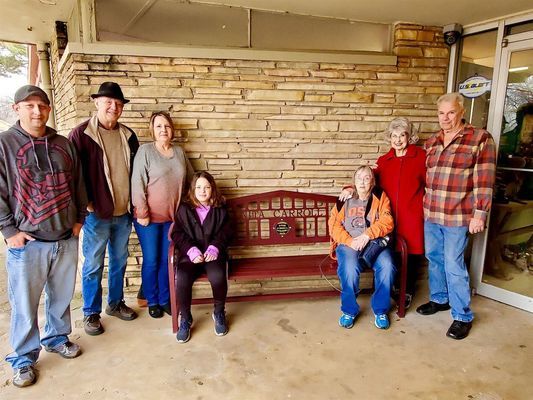 A dedication ceremony was held last week at the Blackwell Youth Center for a bench in memory of Nita Carroll, who dedicated her life to her community and the youth within it. Several city officials attended the ceremony, including Mayor T.J. Greenfield and City Manager Janet Smith. Members of Carroll's family were also in attendance.

“Nita was very dedicated to serving her community as a whole,” Greenfield said. “She helped a lot of citizens – not just kids, but everyone. I think the bench is a very good way to remember her by.”

Carroll passed away in September 2018 after a lifetime of accomplishments. She taught math and science at Blackwell Middle School from 1972 until her retirement in 1996. She operated the BYC from 1967 until 2007, and she taught Sunday school at the First Christian Church for 51 years.

Carroll served on the Blackwell City Council, where she helped raise money for the new Blackwell Animal Shelter. She spent several hours each week with the Goodbye Shoppe and the Chamber of Commerce, which recognized her as Citizen of the Year.

At the ceremony, it was also revealed that the BYC's Board of Directors would discuss a proposal to name the facility the “Nita Carroll Center for Youth.”