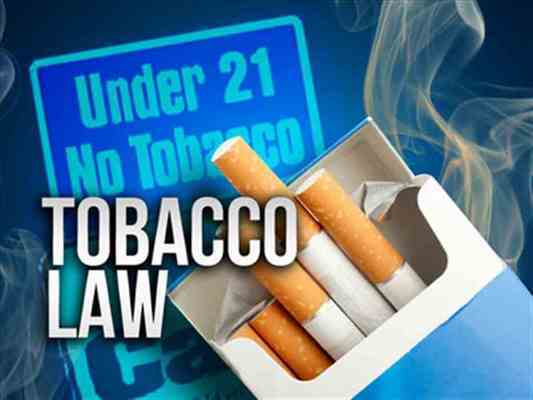 In a move that gained overwhelming support from Democrats and Republicans across the United States, President Donald Trump has signed into law a bill raising the minimum age to purchase tobacco from 18 to 21 nationwide. The change came just days before the Food and Drug Administration announced that it would heighten enforcement of certain federal laws to keep e-cigarettes out of the hands of children and teenagers.

Trump amended the Federal Food, Drug, and Cosmetic Act when he signed the Tobacco Free Youth Act into law Dec. 20. According to the FDA, it is now illegal for retailers to sell any kind of tobacco product to anyone under the age of 21.

The act was proposed by U.S. Senate Majority Leader Mitch McConnell, a Republican from Kentucky, and Sen. Tim Kaine, a Democrat from Virginia.

The Senate passed the bill Dec. 19. Shortly after its passage, Kaine called the legislation “lifesaving.”

“Passage of this lifesaving legislation is an enormous victory for the health of our young people,” he said in a statement. “By raising the age to buy tobacco products nationwide, we can save 223,000 lives and reduce youth tobacco use. I’m grateful for the work of my colleagues on both sides of the aisle and all the Virginians who made their voices heard to join us in this critical effort to improve public health.”

Kaine was referring to a 2015 report from the National Academy of Medicine, which claimed that raising the minimum age to 21 could prevent 223,000 people born between 2000 and 2019 from dying of tobacco-related illnesses.

According to the Centers for Disease Control, 6.2 million middle school and high school students in the U.S. used tobacco products in 2019.

Before the Tobacco Free Youth Act went into effect, some U.S. states had already raised their minimum age requirement from 18 to 21. According to the Campaign for Tobacco-Free Kids, those states include: Arkansas, California, Connecticut, Delaware, Hawaii, Illinois, Maine, Maryland, Massachusetts, New Jersey, New York, Ohio, Oregon, Pennsylvania, Texas, Utah, Vermont, Virginia, and Washington. Washington, D.C. and 540 municipalities across the country had also raised the age requirement before the new law was passed.

The FDA announced Jan. 2 that the agency would “prioritize enforcement” against certain types of e-cigarette products that are unfairly marketed toward children, including fruit- and mint-flavored products.

According to the FDA, the agency will “prioritize enforcement” against electronic nicotine delivery system products, better known as ENDS products, that are targeted toward minors. ENDS products use a cartridge that holds liquid that is aerosolized. Products with “labeling and/or advertising that resemble kid-friendly foods and drinks such as juice boxes or kid-friendly cereal” are subject to the FDA’s scrutiny, according to a media statement released by the agency.

Under the FDA’s new policy, companies must “cease manufacture, distribution and sale of unauthorized flavored cartridge-based e-cigarettes” by the beginning of February or face the FDA. Tobacco- and menthol-flavored cigarettes are not affected.

“If a company can demonstrate to the FDA that a specific product meets the applicable standard set forth by Congress, including considering how the marketing of the product may affect youth initiation and use, then the FDA could authorize that product for sale,” the statement read.

The goal: To protect public health, he said.

“Coupled with the recently signed legislation increasing the minimum age of sale of tobacco to 21, we believe this policy balances the urgency with which we must address the public health threat of youth use of e-cigarette products with the potential role that e-cigarettes may play in helping adult smokers transition completely away from combustible tobacco to a potentially less risky form of nicotine delivery,” Hahn said. “While we expect that responsible members of industry will comply with premarket requirements, we’re ready to take action against any unauthorized e-cigarette products as outlined in our priorities. We’ll also closely monitor the use rates of all e-cigarette products and take additional steps to address youth use as necessary.”

Days after the tobacco law went into effect, local retailers posted notices in their stores that they would no longer sell tobacco products to those under the age of 21.

At the Blackwell Valero, Lea Riff, a store employee, said customers under the age of 21 were “not liking” the change. However, she said, no customers had become “irate” when they were told they could no longer buy things like cigarettes and chewing tobacco.

“They way they see it, if they can enlist in the military, they should be able to buy,” she said.

Riff said she and her coworkers will continue to check the identification cards of tobacco customers using an electronic identification system to make sure that those under the age of 21 aren’t able to get tobacco products.