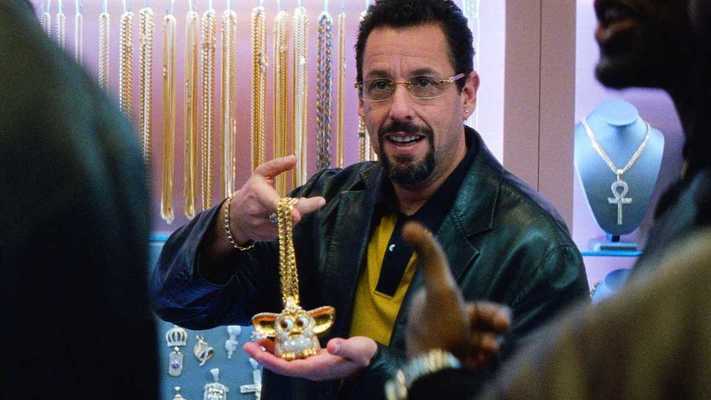 Adam Sandler's surprise bid for a Best Actor Oscar comes in the form of Josh and Benny Safdie's UNCUT GEMS- a delirious, violent, cringe-inducing crime odyssey following Howard “Howie” Ratner, an adulterating Jewish gambling addict and jewelry store owner played by a manic Sandler, who's in deep to nearly everyone in New York City with a pulse.

His big break seems to come in the form of a gigantic black opal that he hopes to sell to NBA basketball star Kevin Garnett in order to pay off his mountain of debt, but the stakes keep rising, bets keep failing, and a pursued Howie sees a chance to win it all and then some on the upcoming Celtics/76ers 2012 playoff game...if he can survive until then.

Making their mainstream debut in the form of 2017's cocaine in film form trip GOOD TIME starring Robert Pattinson, the Safdie Brothers have made their mark as adrenaline junky auteurs being able to capture explosive performances and palm-sweating tension with ruthless ease.

UNCUT GEMS will have you checking your pulse as Sandler's Howie goes from bad to worse, racking up debts and being hounded by nearly everyone in the Big Apple. His gut-turning, sickening, gambling addiction has lead to a pending divorce from his bombshell wife (FROZEN star Idina Menzel) as he and his family observe Passover thanks to an affair he's having with one of his employees (Julia Fox). These two women act as polar opposites in Howie's life.

His wife, Dinah, is disgusted by him, and is almost apathetic realizing what an addicted, selfish, monster he is. His girlfriend, Julia, is in love with him, and will do anything for him. It's an interesting dynamic to see Sandler's embattled character stuck in, because they sort of represent Howie's past and future. You can tell he was once a good man, maybe. You can maybe see he's a victim of circumstance...maybe.

Supporting cast members also include Lakeith Stanfield, star of FX's drama ATLANTA and Netflix's DEATH NOTE adaptation. Stanfield is hilarious, and a genuine thrill to watch. His laid back devil-may-care role as Howie's “recruiter” and Rolex-forger is a joy compared to Sandler's erratic and screaming, obsessive, Howie.

Maybe the biggest surprise here is NBA star Kevin Garnett as himself. He has a very natural charisma and screen presence in such a way that you know it's him, but he's so convincing at this “not-quite-non-fictional” portrayal you keep thinking he's someone else playing him, It's fascinating.

The Safdie Brothers work here with cinematographer Darius Khondji, best known for his passionate love affair with framing brooding, harsh darkness and muted, harsh, colors, like with ALIEN RESURRECTION, PANIC ROOM, and THE LOST CITY OF Z and it gives UNCUT GEMS a gross, filmy, sort of debauchery.

Every night club looks like a hellish Faustian den of sin and Howie's jewlery shop glistens and shines in the same way a casino does: flahsy, alluring, but hard to stomach, as if something is always wrong under the surface.

We get a lot of Khondji's brilliant color mashing, and it makes UNCUT GEMS one of the year's best looking releases.

UNCUT GEMS is the dark horse for Oscar season, and Sandler brings his best, reminding us that the same savant behind JACK & JILL, PIXELS, and GROWN UPS 2 was also the tortured soul in PUNCH DRUNK LOVE, SPANGLISH, and REIGN OVER ME...and he is a force to be reckoned with.