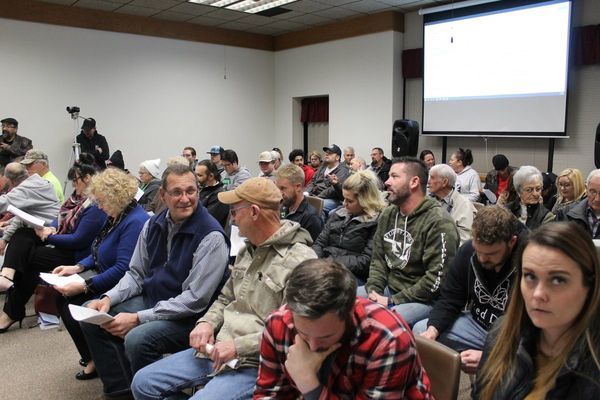 The Blackwell City Council held a tense meeting Thursday night where a crucial ordinance regarding the permits and fees for medical marijuana businesses was ultimately tabled after several local merchants spoke to the Council.

The meeting began with the approval of a request to seek bids for new equipment for the Blackwell Fire Department. The Council also approved the demolition of a structure at 322 W. Ikerd Ave. Diemer Construction’s bid of $5,970 was approved.

Next, the Council appointed Judge Debord as the city’s associate municipal judge and Megan Holden as the assistant city attorney/prosecuting attorney. Holden will assist the city manager and the Council as well as assisting police and code enforcement officers in making their case before the judge. These appointments were made due to both the city attorney and judge recusing themselves from a municipal court case involving a council member.

The next item on the agenda was to give a 60-day notice to Retail Attractions, LLC to end the agreement for economic development and consulting services that began in October 2017. The reasoning by City Manager Janet Smith was that Blackwell would do a better job of “selling Blackwell” than someone from out of town – specifically, someone from Owasso. The contract began under the administration of City Manager Thomas “Chip” Outhier, and since then, it has spawned the Dollar Tree, which is scheduled to open this year on Doolin Ave.

Mayor T.J. Greenfield argued that the relationship with Retail Attractions has “taken time.” He said that, if given any notice, Retail Attractions Founder Rickey Hayes would be in Blackwell. Greenfield called back to the initial arrangement, saying Hayes preferred to work out of Blackwell – “out there” where the business was – making it easier for him to secure retail relations. Greenfield said he was “blown away” and “impressed” by the local initiative to stir more business, but he disagreed with Smith that Blackwell’s various tourism agents and boards could have the right connections that Hayes and his company have provided.

The item was ultimately tabled.

Next on the agenda was the first reading of Ordinance 2020-04, which would see medical marijuana businesses paying a raised permit fee to cover the cost of the City of Blackwell’s inspections for their sites. The item lead to an extended argument and several outbursts from people in the room before it was tabled for further discussion.

The final item was Ordinance 2020-05, which would see the cost of retail beer and retail wine licenses made even. The cost of licenses for convenience and grocery stores would be the same as they are for local stores such as Southside Spirits and D’s Box Store. The argument was made against the ordinance that it would bury local shops and bars such as the Veterans of Foreign Wars and the aforementioned locations.

Eventually, it was settled to charge businesses $50 on wine, $50 on beer, and $25 on the ABLE Commission