Local author raises funds for book on 1955 tornado: "Without Warning" 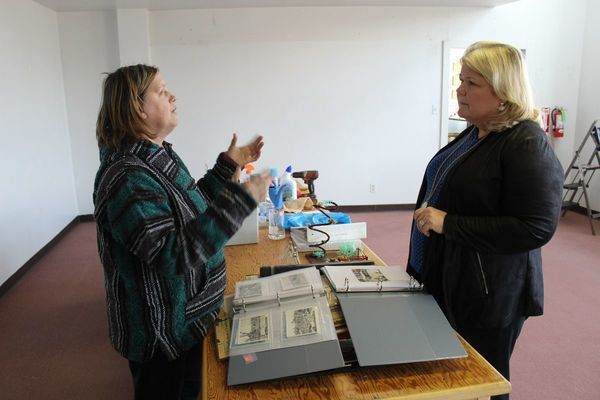 Without warning, the 1955 Great Plains Tornado Outbreak spawned 46 tornados and claimed more than 120 lives. Two F-5 tornados tore through Blackwell, and the devastation they left is still talked about today.

In May, the Top of Oklahoma Museum will honor the 65th anniversary of that horrific night, and to coincide with that, Blackwell native and author Ginny Goresen will partner with Oklahoma novelist Bob Burke to publish a book entitled: “Without Warning: The Blackwell Tornado of 1955.”

“My grandma is a survivor of the tornado,” Goresen said. “I grew up hearing her stories. She would tell me how the sound of that devastation haunted her. … And so I started to do some digging, collecting stories. My friend told me that would make a good book, and I thought, ‘Well, yes it would!’ So I spoke to Bob Burke, my co-author, who has published over 116 books. All of his stories have been related to Oklahoma, and he was on board immediately.”

The book will be published by the Oklahoma Hall of Fame, a non-profit organization. Funds will be required to publish it.

The goal for publication is $20,000, and Goresen said she hopes to raise that money in time for the dedication of the museum’s tornado room, a special display for the anniversary of the 1955 tornado.

“I couldn't have done any of this without the help of Melissa Hudson here at the Museum, and The Blackwell Journal-Tribune,” she said. “Melissa helped me get everything that I needed, and The BJ-T was more than helpful with getting me archives and photographs. Their articles from that time were so informative and on-the-ground.”

Goresen said she interviewed more than 40 people for the book, and added that she had plenty of jaw-dropping photographs as well.

“There are so many amazing stories in this book,” she said. “It's been worth every minute to write it as I've been researching. There were so many brave people with such a dedication to helping others. Neighbors helping neighbors … the entire city rebuilding almost in a matter of months after three fourths of the town's industry was decimated. It's been incredible to learn about.”

Goresen said that, once the book is published, she will hold a signing event at the museum. She is hopeful that acclaimed Oklahoma meteorologist Gary England, who wrote the foreword for the book, will be able to attend.

So far, she has raised more than $7,000 for the book. Donations are tax deductible, and donors contributing $1,000 or more will be acknowledged on the cover page. The museum will also benefit from sales of the book.

Goresen was born and raised in Blackwell. Her grandparents owned Peddicord Jewelry, her mother owned the Pollyanna Clothing Store, and her father practiced law in the community.

After graduating from Blackwell High School in 1978, Goresen attended the University of Oklahoma, where she earned her undergraduate degree in 1982 and her law degree in 1987.

She practiced law in Oklahoma City for 20 years before moving to The Woodlands, Texas in 2007.

While living in Texas, she taught business law at Lone Star Community College.

In 2017, Ginny and her husband, Tom, a retired attorney, moved from Texas to Edmond, Oklahoma.  They have two adult children: Thomas, a third-year law student at The University of Texas, and Patricia, a data scientist at Cisco Systems in Raleigh, North Carolina.