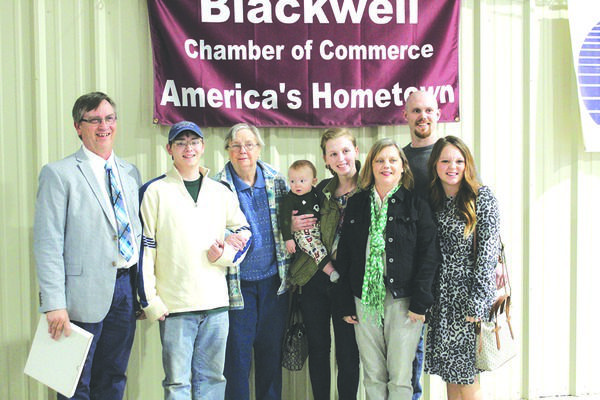 The Blackwell Area Chamber of Commerce held its 126th annual banquet Friday to honor individuals and businesses in Blackwell. The event was set to the theme of “Denim and Diamonds” and was held at the Blackwell Event Center.

The lavish night featured entertainment by the eccentric Wichita-based group “Dueling Pianos,” and food was catered by Klein's Catering of Perry.

The night began with a welcome from outgoing Chamber President Megan Holden and an invocation from First United Methodist Church Pastor “Cap” McIlnay. He segued into presenting the Outstanding Citizen of the Year Award to Blackwell Public Schools Band Director J. Wayne Hudson.

McIlnay, who was the 2019 Citizen of the Year, got big laughs from the audience as he mentioned that being Citizen of the Year comes with perks, such as cutting to the front of the line at Walmart, getting free breakfast and coffee at The Stack and Bob's Grill, and having children asking for his autograph.

“I make light of it, but the reality was – and is – that the people of this community thought highly enough of me to present me with this award,” he said. “It was a humbling experience, and a great honor, and today I get to pass this on to another.”

When presented with the award, Hudson was at a loss for words before speaking.

“I was born here, grew up here, learned to love music here, and the community supported me,” he said. “The community support the past few years has been mind-boggling. The things we've been able to do … I can't say ‘thank you’ enough. Thank you to everyone, and thank you so much for this.”

John Robertson, executive director of the Chamber of Commerce, then gave the introductions for the night and recognized special guests in attendance.

“I just wanted to say how hard it will be stepping in for you, Megan,” Kuchar said. “Your dedication to the leadership of this board and this community has always been top-notch.”

Kuchar continued, admiring the dedication of the Chamber of Commerce for 126 years of communal gatherings celebrating Blackwell's accomplishments.

“I want to thank all the businesses here, and all those who support them,” Kuchar said. “As your 2020 president, it is my desire to show every business how important you are to this community. It is the mission of this body to advance the economic well-being of our city. It is the relationships we build together that make this community. The strong partnerships equal a strong community. We're all in this together, and I hope you begin to notice that we run things a little differently in the next few months: a difference in our appreciation, and in the programs that support our business and help to promote Blackwell.”

Following Kuchar’s speech, Holden presented the I Am Blackwell Award to Blackwell Elementary School Teacher Haley Curfman. The award was given for her dedication to her students, as well as her viral success in putting BES and Blackwell “on the map.” Curfman's most recent endeavor was with State Farm Insurance. She obtained a grant to help install a sidewalk to the elementary school along Ferguson Ave., a project that is now underway.

Clark Bishop, manager of and partner with Hutton's Pharmacy, presented the Business of the Year Award to Bubba's Outdoor Sports.

“They started with 400 items, and now they have over 4,000,” Bishop said. “We want to congratulate them. They've done so much for us, all the citizens and the Chamber.”

The Volunteer of the Year Award went to Terrie Grell after an emotional instruction by Emily Jantz.

Lastly, Lewis Kuchar presented two awards to Clark Bishop. The first was the “Oh, Craps” Award as an inside joke from the Chamber's successful New Year's Casino Night. The second was the Chamber Director of the Year Award. Bishop declined to give a speech, but he said he was beyond thankful to the community for supporting him and Hutton's Pharmacy.

Following the presentations, Dueling Pianos by Hi-Fi Productions played well into the night, with some highlights being a “dance train” and a war over the University of Oklahoma and Oklahoma State University fight songs.

On Facebook, the Chamber of Commerce called the event a “huge success.”