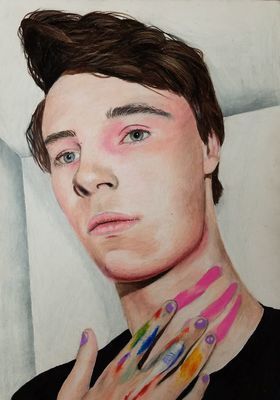 Blackwell High School student Drew Dollarhide won the regional Silver Key Award in the National Scholastic Art and Writing Competition for his self-portrait colored pencil drawing entitled “Fragile.” His work was recognized by a panel of creative professionals amongst 1,155 works submitted within the State of Oklahoma.

Dollarhide entered the piece in the Young Talent in Oklahoma student show, which runs until Feb. 14. His work is featured in an exhibit alongside the work of BHS art students Emmaleigh Scism and Samara Mitchell.

Submissions are juried by luminaries in the visual and literary arts, some of whom are past award recipients. Panelists look for works that best exemplify originality, technical skill, and the emergence of a personal voice or vision.

Students receiving Gold Keys, Silver Keys, Honorable Mentions, or American Voices & Visions Nominations are celebrated within their communities through local exhibitions and ceremonies. Gold Key works are then judged nationally by a panel of creative–industry experts to receive National Medals. National Medalists are recognized in part at the National Ceremony at Carnegie Hall in New York City.

Since 1923, the awards have recognized some of America’s most celebrated artists and writers while they were teenagers, including: Tschabalala Self, Stephen King, Kay WalkingStick, Charles White, Joyce Carol Oates, and Andy Warhol.