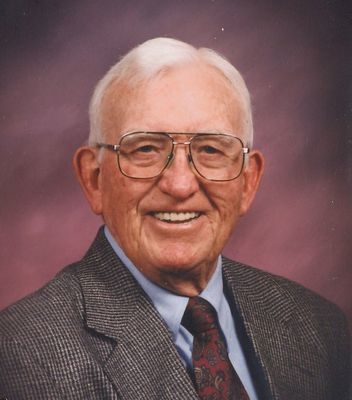 As a teenager, Phil worked the fields with horses on his Uncle Earl’s farm, where on weekends he hunted for coyotes with greyhounds his uncle raised.

After starting to work for the Frisco Railroad, Phil enlisted in the U.S. Army in December 1942. During World War II, he served in the U.S. Signal Corps at Camp Maxey, TX, working as a telegrapher communicating with the Pentagon via Morse Code.

He met the love of his life, Rosalee Vollmer, when he worked on the railroad in Salt Fork, OK. They were married at First Christian Church in Garber, OK on December 24, 1944, shortly after being discharged from the Army. On Christmas Eve, 2019, they celebrated 75 years of marriage.

Phil worked as an agent/operator for 44 years for the St. Louis-San Francisco (Frisco) and Burlington Northern Railroads. The family lived in several locations in Kansas and Oklahoma, including 17 years in Cordell, 10 years in Clinton, and one year in Blackwell. While in Cordell, he served 5 years on the Cordell School Board, including one year as President. After retirement, he and Rosalee moved to Ponca City in 1986.

Phil had an incredible ability to use his hands. In the service and later in his job with the railroad, he was a very fast telegrapher. Over the years, he loved gardening, latch-hooked many rugs for the family, and often shelled over a hundred pounds of pecans annually to give away. When he was younger, he enjoyed hunting for quail, duck and pheasant.

His trademark was his fishing lure business, producing thousands of fishing lures over fifty years. He developed a special lure, the Cordell Spinner, and filled orders for professional fishermen entering tournaments. He took pride in melting lead, shaping and painting lures in many different colors. Since he was an avid fisherman, he became an expert in the trade, ordering and studying fishing equipment and sharing his knowledge. His biggest thrill was to give his lures to his children, grandchildren, their friends, neighbors, and many other people he knew. He looked forward to taking his children and grandchildren fishing and giving them rods and reels and tackle boxes full of lures.

Phil was known for his hearty laugh, his generosity, and mostly his love for his wife, Rosalee and his family. He enjoyed planting trees at Washington Elementary School for his granddaughter’s school project. Driving the Friendship Feast van and visiting with the people was a real joy to him. Sunday mornings he attended First Christian Church regularly until his health no longer allowed him to drive.

Phil’s passion was his OU Sooners. He faithfully watched the games and kept up with the players, coaches, and many other teams. He loved sports! He attended hundreds of games of his children and grandchildren. His family (and their interests) was always his major focus in life. A recent quote of his was, “I have nothing to complain about my life. I have had a good life.” His legacy will continue to live on in the lives of those who knew him.

A family memorial service will be held at a later date. In lieu of flowers memorial contributions may be made to the Friendship Feast Ministry at First Christian Church, 210 North 5th Street, Ponca City, OK 74601.

Arrangements are under the direction of Trout Funeral Home & Crematory.