Jordan Green: What OK lawmakers are saying about Trump's acquittal 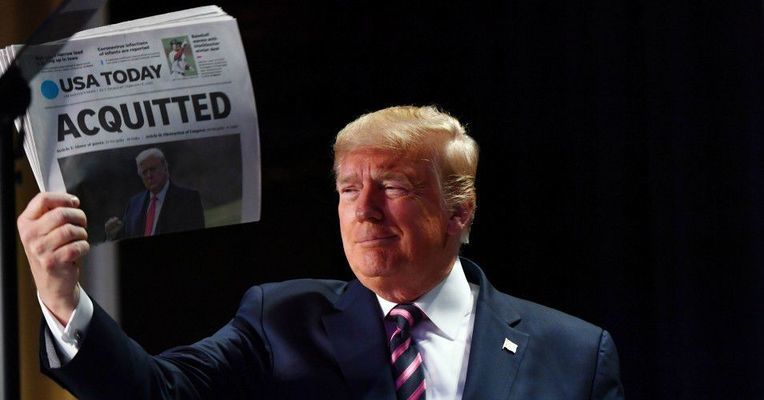 The U.S. Senate voted to acquit President Donald Trump on two counts of impeachment on Feb. 5. The votes mostly followed party lines; Mitt Romney, a Republican senator from Utah, was the only Republican who voted against Trump.

Both of Oklahoma’s senators, James Lankford and Jim Inhofe, voted to acquit the president.

In December, four of Oklahoma’s representatives voted against the articles of impeachment when they were presented in the House. Congresswoman Kenda Horn, the only Democrat in Oklahoma’s congressional delegation, voted for the articles.

No matter where you stand on the issue, the impeachment trial has been an historic moment in our nation’s history, and the people who represent us in Congress had a say in it.

Here’s what Oklahoma’s congressional delegation had to say about the impeachment process and the Senate’s vote of “not guilty.”

“I finally have good news for you,” Inhofe said. “After the biased, unprecedented House impeachment process, a fair Senate trial has acquitted President Trump. It’s over. I listened to the facts. I listened to the evidence. Or really, the lack of any evidence whatsoever, and I was convinced: President Trump did not commit any crime. Now we can all get back to what we’re supposed to be doing here – working on behalf of the American people.”

Lankford didn’t issue a statement following the impeachment vote, but he issued one the day before.

“Our country is deeply divided on multiple issues right now,” Lankford said. “The impeachment trial is both a symptom of our times and another example of our division. The nation didn’t have an impeachment inquiry for almost 100 years until 1868 with the partisan impeachment of Andrew Johnson. Another impeachment wasn’t conducted for over 100 years after that when the House began a formal impeachment inquiry into President Nixon with an overwhelming bipartisan of 410-4. Just a little over two decades later, there was another partisan impeachment process — President Clinton. When he was impeached on an almost straight partisan vote. Tomorrow, I will join many others in a vote to acquit the President of the United States. His actions certainly do not rise to a level of removal from office. This is clearly another one of our partisan impeachments, now the third in our history.”

“Now that the Senate has acquitted the President, protecting the institution of our democracy from a flawed and partisan probe, I hope we can return to focusing on legislation that the American people sent us to Congress to address. Our communities’ roads and bridges are in need of repair and investment and our nation is in dire need of a healthcare system that provides access to quality, affordable healthcare options with lower healthcare costs. Bipartisan legislation was long a norm of our historic institution and it’s my hope we can return to that civil norm."

“From day one, this has been entirely politically driven and it’s no surprise that President Trump was acquitted today,” Mullin said. “Throughout this entire impeachment process one fact has remained the same: President Trump has not committed a single impeachable offense. I hope we can move on from this and focus on delivering results for the American people.”

“House Democrats spent three years obsessed with impeachment. Today, the Senate is closing the final chapter for good,” Hern said. “Back home, I've spoken to countless constituents about their concerns, and I can tell you Oklahomans aren't worried about impeachment. They're focused on healthcare, the economy, and securing the border – real issues that matter to everyday Americans. While we've made progress these last three years, our work isn't over yet. Now that this political stunt pulled by Nancy Pelosi and her progressive followers is behind us, let's get back to the job the American people elected us to do.”

“After an exhausting ordeal initiated by House Democrats’ deeply flawed and unfair impeachment process, I am relieved that the Senate could finally put to rest what has been a political and partisan stunt from day one,” Cole said. “In the days and months ahead, I urge my Democratic colleagues in the House to finally abandon their misguided impulses to impeach the president and actually work with him for the good of the American people. … Moving forward and as we urgently monitor critical crises such as the coronavirus, our goal must be to focus on areas we can work together for the common good.”

“I am disappointed with how the Senate approached this trial, but I'm committed to bringing both parties back together to address the issues we're facing – from drug prices to student debt,” Horn said. “There is more that unites us than divides us. We cannot let partisan politics stop us.‬”

Opinion: You have no right to complain about th...