Review: BIRDS OF PREY is a funny, fabulous, and feminist frenzy 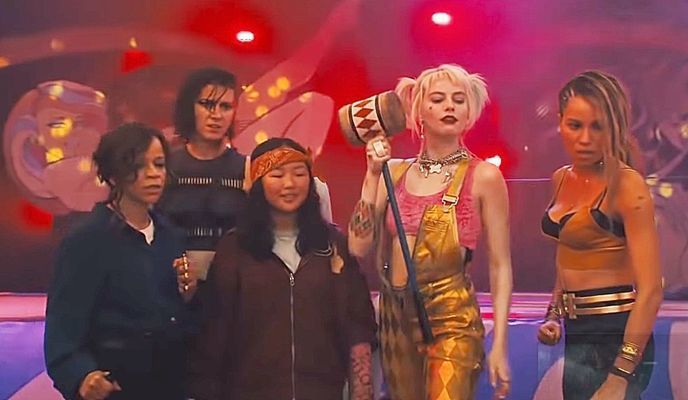 “Do you know what a harlequin is? A harlequin's role is to serve. It's nothing without a master. No one gives two shits who we are, beyond that.”

Cathy Yan's female-centric DC Comics action movie BIRDS OF PREY opened this past weekend and it was refreshing, hilarious, and ass-kicking. It was a movie so fun and genuine that I couldn't stop thinking of how much I was enjoying it the entire time, and the cheering audience I saw it with seemed to agree.

This “girl-power feminist John Wick” sugar rush of blood, broken bones, and killer eye makeup begins with Harley Quinn (Margot Robbie) down on her luck in Gotham City after her breakup with The Joker (Jared Leto) from 2016's SUICIDE SQUAD. Quinn, a partying vagrant with a pension for violence and egg sandwiches, accidentally finds herself on the wrong side of the explicitly fabulous and increasingly (terrifying) psychotic crime lord Roman Sionis (Ewan McGregor) once he loses track of a priceless diamond, and enlists Quinn's help.

The diamond, it turns out, is in (literally) the possession of a street rat foster kid named Cassandra Cain (Ella Jay Basco) who is also wanted by a hard-boiled Gotham City Police Detective by the name of Renee Montoya (Rosie Perez). Along for the chase is Sionis' personal songbird and reluctant hero-for-hire Dinah Lance aka Black Canary (Jurnee Smollett-Bell) and, tailing them all, the blood-thirtsy matron of vengeance, The Huntress, played by Mary Elizabeth Winstead.

These Birds all end up swearing, shooting, bashing, jumping, and kicking their way through both each-other and the various turmoils of Gotham City's dirty streets as Roman Sionis and his boytoy Victor Zsasz (Chris Messina) close in on them.

BIRDS OF PREY is a lot like, say, the female version of something similar to The Expendables. We follow Harley Quinn on her journey of emancipation- an attempt to separate herself from the Clown Prince of Crime. She doesn't want to be known as “Harley Quinn and the Joker”...just Harley. All the femme-fatales are just humans wanting human things. For being such a color-drenched exercise in insanity, all of these characters are very easy to sympathize with, probably thanks to the punchy script by Christina Hodson (Bumblebee) that seems to balance between indie movie and comic book crime drama.

Harley might be a roller-derby queen, a lunatic, an anti-hero, etc. But she's a woman under all that...or maybe that's all under her? The characters in BIRDS OF PREY feel refreshingly real and, at the same time, larger than life. Much how we might all see certain women in our life. Harley wants to be independent. Cassie wants a family. Black Canary wants to make a difference. Montoya wants to clean up the City...and Huntress wants a family. In all of these broken- yet fierce- women they find pieces of each-other, and maybe we find pieces of ourselves in them.

The film is R-Rated and the action shows it. Knees crack, legs bend the wrong way, bones get shattered...it's awesome. The fight choreography and cinematography rivals action greats like THE RAID 2 and JOHN WICK 3. I think this is a film with a great potential to be revisited, especially the glimpses of how Harley deals with her PTSD and abuse in the form of musical numbers.

These BIRDS OF PREY are definitely ones to watch the skies for.

Opinion: You have no right to complain about th...