Review: FANTASY ISLAND is a fun- if corny- thriller 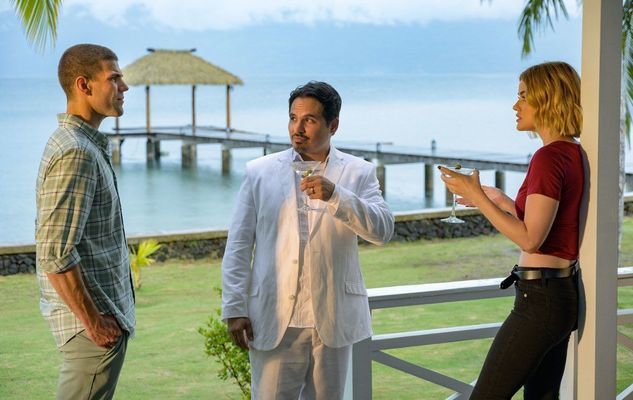 “The island isn't what you think it is.”

Blumhouse's FANTASY ISLAND, a horror-thriller adaptation of the popular 1970's TV drama, released over Valentine's Day weekend and I got the chance to catch it for myself, to see how the Jeff Wadlow-directed experiment pays off. The result is...surprising, to say the least.

The film opens on the titular Fantasy Island, a tropical resort getaway with a decadent sandy white mansion overlooking the clear blue ocean as five guests have won the trip of a lifetime to have their fantasies come true on behalf of the enigmatic and mysterious Mr. Roarke (a refreshingly serious Michael Pena). Of course, as he warns, “our fantasies don't always play out as we expect them to.”

We're introduced to businesswoman Gwen Olsen (Maggie Q), former NYPD Officer Patrick Sullivan (Austin Stowell), partying step-brothers J.D. And Brax Weaver (Ryan Hansen and Jimmy O. Yang), and the overtly assertive Melanie Cole (Lucy Hale) as Roarke and his assistant Julia (Parisa Fitz-Henley) size them up and prepare them for their fantasies...of course, as Roarke warned, their fantasies aren't exactly what they seem. And a nefarious force seems to be behind the island- and Roarke's- mysterious wish granting abilities.

My only exposure to the original ABC series was, in passing, a few clips of screen legend Ricardo Montalban as Roarke and Herve Villechaize as his assistant Tattoo (“Ze plane! Ze plane!”) so I didn't have a lot to take with me, aside my general knowledge that the original series was a more wholesome endeavor where the guests would learn something introspective during their fantasies, which didn't always play out according to plan. So, rightly, people seemed shocked at a “horror themed” reboot.

FANTASY ISLAND is a PG-13 “horror film” in all the most groan inducing ways. There's sexless sex appeal, cheap jump scares, limited (but safe) body horror, and eventually some zombie-like creatures and a creepy girl crawling on walls. It was quaint, like revisiting some mid-2000's horror feature on CineMax late at night before the Skinemax started. It's not scary, but when it attempts to be, at least it is admirable.

FANTASY ISLAND, however, makes up for it's lack of horror with a willingness for some good emotional beats and an interesting (if long-winded) story. The ex cop's fantasy is to be a soldier, the business woman's is to accept a marriage proposal she rejected, the brothers want to party it up with no regrets, and our social outcast wants revenge on a childhood bully. These surface level fantasies all end up evolving into something more cathartic and genuinely meaningful before a surprising twist ties them all together.

There's a really good bit with Mr. Roarke where the audience discovers his origins, and his reasons for granting the wishes and chances that he does. We learn why he “does the Island's bidding” and it's a genuinely nice scene where he, in a sense, finally pays for his own fantasy.

The performances are about what you'd expect, with the most groan inducing being Ryan Hansen's “chy'eah bro!” midlife crisis frat bro (but I can't tell if that was intentionally terrible or not) while the best obviously go to veteran actors like Pena, Maggie Q, Lucy Hale, and a surprising appearance by Michael Rooker. I will say the “real” villain's turn into a cackling crazed lunatic is the stuff late-night movies are made of.

The film is well-directed and once you cement yourself into it without expecting some terrifying, nerve rattling, horror experience you end up having a better-than-expected time. I think there's a bit more that a more creative writer and director could have done with an Island where anything is possible, but the story was a fun ride and allowed for some interesting set-pieces like a stand-off between Vietnam-era soldiers against masked tactical Russian zombies in a coke-lord's grandoise party resort, or a lumbering Jason Voorhees-esque doctor with a mouth of stitches chasing down two terrified girls in a moment of old fashioned horror-fun.

I'd recommend FANTASY ISLAND if you're bored and looking for something interesting to sink your time into. It's not very scary, but it is a lot of fun, so older folks who might have enjoyed the wholesome cheesiness of the original should realistically feel right at home on this....FANTASY ISLAND.