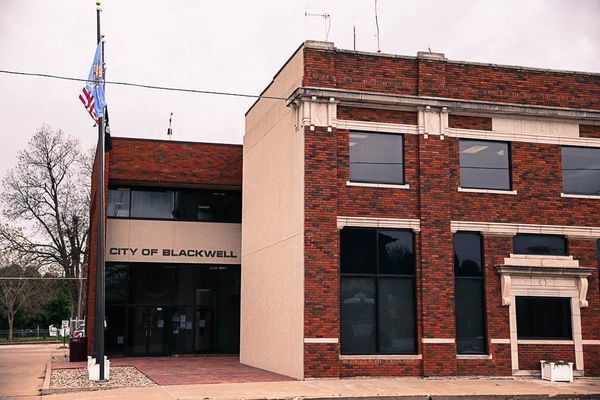 The first reports came from the TOHS Museum and Golf Course Authority Boards followed by the Treasurer’s Report from CFO Frank Crawford.

Crawford reported several very positive items regarding the financials including the fact that BPT funds to the city increased from $2M to $4M in gains, and that the city is operating in the black despite dire predictions presented in this year’s budget developed by MS Meacham, prior to Crawford’s appointment.

The business meeting began with public comments from Blackwell residents Karen Baker and Becky Adams. Baker, who recently published a Letter to the Editor in the Blackwell Journal-Tribune and posted similar comments on social media, spoke about Smith.

“I just wanted to say that, when you hired Janet Smith back in January [2019], that you asked her for transparency and accountability to all of us. Integrity is another word I can use in a sentence with Janet. It matters to her. … I feel like Janet has surpassed and done her job. I believe the department heads and city employees have faith in her.” Baker’s comments ended and were met with applause from the attendees in the chamber which included residents, the public, employees, and a many members of the Blackwell FOP.

Adams comments concerned the Chamber of Commerce's old electronic billboard on East Doolin Ave. She was curious as to why the City of Blackwell was paying for the demolition of it.

After the two citizens spoke, City Attorney Bryce Kennedy then addressed proposed amendments to the city charter that will be placed on the ballot for the April 7 elections vote.

Proposition 1 would see charter provisions requiring newspaper advertisement and sealed bids for the purchases of $5,000 or more be raised to $50,000. Proposition 2 would see the newspaper advertisement and sealed bids for certain purchases to exempt purchases already subject to competitive bidding by state law, professional services, and in cases of emergency. Proposition 3 would clarify the charter to provide that the city manager, municipal judge, city attorney, chief financial officer, and city auditor are all appointed by the Council, while all other employees are appointed by the city manager.

The next item considered was for Council to approve the appointment of Scott Shepherd as a trustee to the Blackwell-Tonkawa Airport Trust Authority, which they did.

The Council also approved an amendment to the agreement between Seacoast Roofing and the city for the renovation of the Top of Oklahoma Museum. The amendment allows additional work to replace the extreme deterioration of the structure around the dome for a cost not to exceed $55,000.

The Council heard from Code Enforcement Officer Jerry Wieland about the demolition of three properties: 325 West Ferguson, an abandoned house; the Chamber of Commerce sign on Doolin Ave.; and 439 East College Ave., another abandoned structure.

Demolition of the two structures was approved. The Council held off on any action regarding the Chamber of Commerce’s sign until Wieland could provide evidence showing that the Council had previously approved its inclusion in the list for demolition.

The next item on the agenda was the proposal of an executive session to discuss a performance review of Smith. Webb made the motion to convene, but the other Council members were silent on a second to the motion. Then Councilman Jon Webb spoke again, “Yep. … It's been over a year, time for a review,” he said. “A performance review should, uh, take place in executive session rather than out here.”

Webb was met with silence before continuing: “If there's not going to be discussion, I have some. I requested this. What I requested was some input because of accusations … charges … against myself … Council conduct. I believe those charges, those accusations, are rather frivolous. For example, I. …”

Webb was cut off by Councilman Steve Marquardt, who said that Webb’s comments were not on the agenda.

“Yep, I set foot in the museum, I was curious,” Webb said before Marquardt reminded him again that his statements weren't on the agenda.

“We're talking about review, OK? You guys don't want to go to executive session? We'll discuss some of it here,” Webb replied.

“If you're going to discuss the city manager review, you should go into executive session,” Kennedy said. “If there's a vote not to go, then you have to move on to the next item. I'm advising that you should go into executive session to discuss performance. But the item is broad enough that you could discuss it here.” Webb then asked, “I'm curious why this Council isn't interested in a … doing an annual evaluation … that is required?”

Kennedy was unsure whether that was required in Smith’s contract. He then attempted to get the Council to go into executive session again for the liberty and confidentiality of all concerned parties.

“Yep, so you're not willing to do an evaluation that's expected, required? You're not doing your job,” Webb said to the rest of the Council.

“You're not concerned with how I conducted myself?” Webb asked. Silence was his only answer.

“There is a motion,” Marquardt said. “Is there a second?”

“I'll call for that, Steve, I'm the chairman,” Greenfield answered.

There was no second, and the motion died.

The meeting continued to conduct the business of the municipal authority, then adjourned soon after.