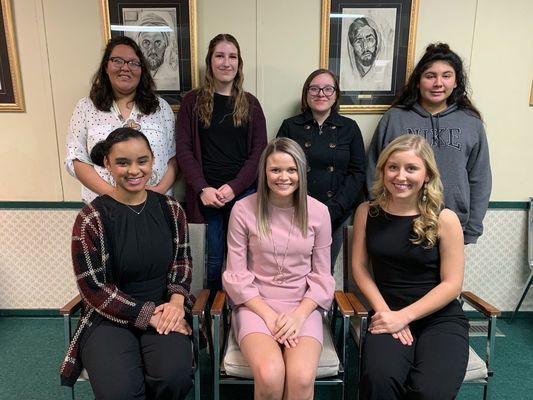 The 2020 delegates to attend Oklahoma Girls State were recently chosen and sponsored by Blackwell’s Russell-Litchfield Unit #7 and Blackwell Elks Lodge. The girls chosen include the following:

Delegate, Kingsley Goff is the daughter of Haley Goff. She is involved in PepClub, Basketball, FCA, and Track. She has been a Basketball attendant her Sophomore and Junior years. She attends the Silverdale Community Church and also helps her mom each year with the NOKID hungry bake sale. She plans to attend Oklahoma University to pursue a degree in Journalism. She would like to work as a sideline reporter for ESPN!

Delegate, Merik Edgar,is the daughter of E.J. and April Edgar. She is involved in softball, Pep Club, FCA, and Student Council. She is a Wrestling manager. She is the Junior Class President in Student Council, a member of the National Honor Society, and has been a Football attendant her Sophomore and Junior years. She is on the Principal’s honor roll. She attends the Immanuel Baptist Church and is a blood donor for the Oklahoma Blood Institute. She plans to attend NOC and play softball and go to UCO and pursue a career in nursing.

Delegate Emily Ashford is the daughter of Sam and Heidi Ashford. She has played softball for 3 years, basketball for 2 years, and was a mat maid this year for the wrestling team. She is also a member of the Pep Club, Student Council, and involved in FCA. She is a member of the National Honor Society, on the Principal’s Honor Roll, and has been a football attendant her Sophomore and Junior years. She attends the First Christian Church where she is involved in the Youth Group. She volunteers for the Oklahoma Blood Institute. Emily plans to attend UCO to get her bachelor’s degree and then go on to become a dentist.

First Alt., MayElla Seaboy Clift, is the daughter of Aimee Seaboy. She is active in the High School Chorale and Jazz Choir along with being on the Academic Team. She is on the Principal’s Honor Roll. She does Face Painting to earn money to help with Choir activities. She would like to pursue a degree in either Music Education or Art Therapy. She is a proud Native American and plays the Guitar, ukele, bass guitar, and piano.

Second Alt., Emmaleigh Scism, is the daughter of Michelle Shuart and Jeff Shuart. She is involved in Pep Club, Student Council, and Yearbook. She is on the Principal’s Honor Roll and the National Honor Society. She has entered the Kay Electric Essay Contest and Scholastic Art contest. She attends the Church of Christ. She plans to join the air force as either a linguist or a lawyer (JAG).

Third Alt., Harley Roberts, is the daughter of Kimberly Roberts and Robert Stajakovic. She is a member of the choir. She has been on the Honor Roll and in the Honor Society. She attends the Tabernacle Church and is active in the Youth Group. She would like to attend OSU and major in biology and become a Marine Biologist.

Braman Alt., Lluvia Convers, is the daughter of Rick Convers. She attends Pioneer Tech in the machine tool department. She is on the prom committee at BHS. She is on the Honor Roll and won a machinest award. She helps at the Youth Center, the Friendship feast at her church, and helps DeWayne Muret with his catering business. She plans to finish her CNC degree and go on to college to become a lawyer.

Candidate, Fabiola Favela, is the daughter of Miriam Rios. She is a member of the Pep Club and has been a varsity cheerleader for 3 years. She was a member of the 2019-2020 regional Cheer Champ team. She was a wrestling attendant her Junior year. She attends the Saint Joseph Catholic Church. She plans to attend a Jr. College and then onto a university to pursue a career in Radiology.

Candidate, Emily Lewis, is the daughter of Michael Lewis. She is a member of Pep Club and plays softball. She is on the Principal’s Honor Roll has been a Wrestling attendant her Sophomore and Junior years. She plans to attend NOC and then onto another University.

The American Legion Auxiliary 2020 Girls State will be held on the OU campus in Norman from May 24,2020 through May 29, 2020. Girls State is an educational program focused on government, leadership, and patriotism. The entire week is spent learning about city, county, and state government. They must be junior girls in High School and must never have been married.

They should show high moral character, leadership qualities, ability to work with others, and an interest in government. Delegates must salute the Flag of the United States of American and show it proper respect.