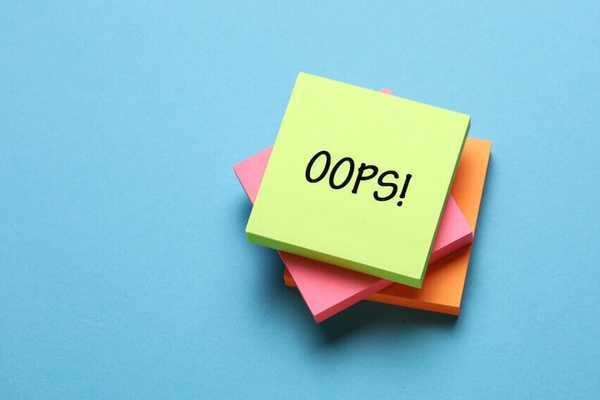 Let’s get something straight: We all make mistakes, and we can learn from them.

A few weeks ago, I was working late into the night on the next edition of my college newspaper. As the news editor of the paper, I wear many different hats: I’m responsible for writing stories, assigning stories to reporters, and then editing those very stories. Add designing newspaper pages and taking photos to the list.

Usually, I design a few interior pages of the paper. That week, however, I had the honor of designing the front page – the very front page. I was excited; it was something I had wanted to do since I started working there.

I made a list of my stories, thought about how I wanted the page to look, and sketched out a plan. Then, I got to work.

I started working on the page on Monday. I probably spent an hour or two on it. The next day, I spent another three on it. When all was said and done, I thought it was a good page. I felt honored that my editor and newspaper adviser allowed me to design it, and I wanted to show my family and friends the product of my work; after all, I did work hard on it, and it meant a lot to me.

Just minutes after I posted it, someone brought an error to my attention: I had a misspelled word in a headline – and it was a word that I should have known how to spell. It was only off by a letter, but nevertheless, it was incorrect.

Then someone pointed out that someone’s title was wrong in a story. It said “president.” It should have said “vice president.”

Both of the people who critiqued my work are professional writers. I would expect them to find flaws in my work. But the person who pointed out the most significant error I made was none other than my dad, who said that one of my headlines was misleading.

I’ll not recount the particulars of that mistake. My face is still a little blushed.

When I realized what I had done, I marched right back to newsroom. I logged back onto the computer, opened up the page, and made the changes I needed to. Voila!

I breathed a sigh of relief. I knew then that I could take pride in my work. I was able to fix my mistakes long before we went to press. However, I didn’t get those errors fixed on my own.

No one likes having his or her mistakes pointed out by others. Why? Because no one likes making mistakes in the first place. As a journalist, mistakes can be especially embarrassing. But in spite of our best attempts to prevent them from happening, those of us in journalism do make mistakes – because we’re human, too, despite what some politicians would like you to think.

Even though I don’t enjoy finding out about my goof-ups, I know they have to be corrected so that I can grow and improve as a professional – and as a person. I know that I’m human, and I know I’ll never be perfect.

But here’s the caveat: Simply accepting the fact that we’re not perfect is not OK. Failure is an important part of the learning process, yes – but only if we actually do learn from our mistakes. I know one thing: I won’t misspell that word again. We have to apply that same principle to the other things we screw up in life, and opportunities to do that are ample.

As I go throughout my days, I’ll continue to listen to people when they point out my mistakes. I know that some will be nicer about finding my flaws than others will. But no matter the situation, I’ll keep my mind open. Instead of being defensive when someone tells me where I’m wrong, I’ll try to be receptive of their criticisms. Even if they’re being overbearing or nit-picky, I’ll do my best to hear them out.

No one likes making mistakes, but we all do. I’d rather swallow my pride and fix my mistakes than live with them.

The next time I make one, I hope someone will point it out – and I’ll look forward to making it right.

The next time you make a mistake, own it, fix it, and learn from it. That’s how you grow – and if you’re not growing, you’re dying. Isn’t this the truth?