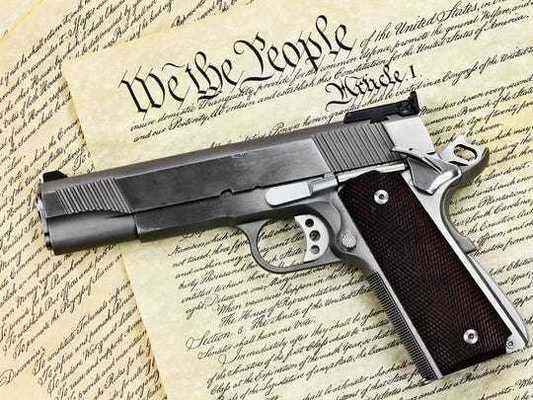 Kay County Sheriff Steve Kelley has signed a declaration naming the county a “Second Amendment Sanctuary,” making it the latest addition to the growing number of counties in the state where law enforcement and government officials have vowed to protect citizens’ rights to keep and bear arms.

Kelley signed the declaration Monday, and it was approved by the Kay County Board of Commissioners.

Kelley wrote in the declaration that he will “oppose any and all infringements on the rights and liberties of law-abiding citizens to keep and bear arms” and that his office will not use public funds to restrict gun rights.

“As the Sheriff of Kay County, I swore an oath to protect and support the Oklahoma and United States Constitutions,” Kelley said in an email. “There is no other RIGHT more sacred or vital in protecting the freedoms and liberty of American citizens than ensuring the protections afforded under the 2nd Amendment.”

Kelley told the Journal-Tribune he wrote the declaration in response to recent legislative action in Virginia that he feels could trample on citizens’ rights to own firearms.

Virginia’s state legislature is controlled by Democrats, and this year, state lawmakers passed bills stopping the free transfer of firearms. They also passed a so called “red flag” law, allowing law enforcement entities and court officials to seize firearms belonging to individuals who have been deemed threats to themselves or others. Defendants may not receive a court hearing before their firearms are seized.

“I don’t think we’ll ever have to worry about that here in the State of Oklahoma,” he said. “I’ve talked to several legislators this past month or so, and they don’t feel we’ll ever become a state like Virginia … . That’s the main point in it.”

While the declaration was approved by the board of commissioners, it has no legal impact. Kelley said it’s just a “political stance against what we could consider bad legislation.”

“Any law that’s passed in the state, whether it’s now or in the future … in my opinion, it’s always been at the discretion of the law enforcement officer,” he said. “I don’t have to arrest anybody at the time of a crime. I can always investigate and determine what I need to do at a future date. … Of course, if it’s in the Constitution, I’ve got to carry it out. This declaration that I’ve signed, it’s not law.”

Even though anti-gun legislation may not pass through the state Legislature, new restrictions on firearms and the right to carry them have been proposed.

The bill died in committee in February. Twelve votes were cast against it, and only one vote was cast in favor of it.

“The Second Amendment of the United States Constitution guarantees citizens the right to keep and bear arms without infringement,” Roberts said. “We already have a number of protections in our law. I was happy to vote against this latest attempt to repeal a law that has been so soundly supported by state citizens, an overwhelming majority of state lawmakers and the governor.”

By signing the declaration, Kelley joins more than 20 other Oklahoma sheriffs who have declared that their counties will protect gun owners. In February, Logan County Sheriff Damon Deveraux started the pro-gun movement when he signed a declaration similar to Kelley’s. Since then, the sheriffs of Canadian, Lincoln, Stephens, and Ottawa counties have followed suit.

Lowe spoke out against Deveraux’s declaration.

“A sheriff's job is not to dictate his opinion on a law or to determine whether a law is constitutional or not, it's the court's job,” he said in a statement after the first declaration was signed. “I totally disagree with [Deveraux] imposing his political opinion on this issue. Imagine if a sheriff decided they were going to enact stricter gun laws for their county? This is not how Democracy works!”