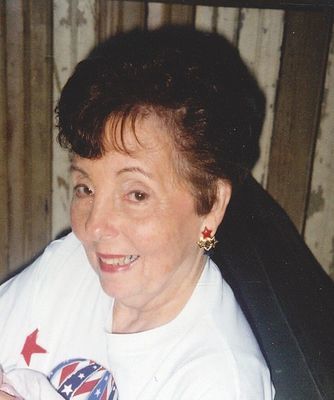 A memorial ceremony to celebrate Ellen's life will be held at 2:00 pm, Tuesday, March 3, 2020 at the Christian Life Church in Tonkawa with Pastor Josh Reese officiating. Following the ceremony, Ellen will be laid to rest next to her husband Frank at the I.O.O.F. Cemetery in Tonkawa. Honorary casket bearers will be Randall Esch, Craig Esch, Scott Loftis, Mark Ulrich, Trey Perry, and Richard Howard. Arrangements are under the direction of Trout Funeral Home & Cremation Service of Tonkawa.

Ellen was born on January 11, 1929 to Lloyd S. Myers and Emma C. Kitchen Myers in Seminole, OK. Ellen's family moved to Tonkawa shortly after her birth. She attended Tonkawa schools; graduating as salutatorian in 1946. After high school, at the roller skating rink in Blackwell, Ellen met Frank Teten. They were married in Blackwell in 1948. Blackwell became the family home where her sons Allen and Mark were born. While her children were teenagers, the family moved to Tonkawa where the family business was located. Throughout those years, Ellen was a home maker for her family. After her children were grown she attended Northern Oklahoma College and earned an Associate's Degree in accounting. She used her new degree as an employee at N.O.C. from the mid 1960's until 1980. Then, Ellen worked as the Tonkawa City Clerk for some years before she became the bookkeeper for the family welding business Frank's Hard Facing. Her career was completed at Bob Columbe's office, before she ultimately retired. Ellen and Frank enjoyed traveling to camp and fish with each other, no matter the weather, being dear soul mates. After 45 years of marriage, Frank passed away in 1993. Ellen married Lowell Mitchell in 1994. Their shared endeavors included many trips to sporting events in the region, even accepting and embracing his love of the OSU Cowboys, after having been a staunch OU fan up to that point.

Feisty, ornery, kind and opinionated are a few words that describe Ellen. While she had a small stature, her personality and zest for life were large. Some of things she enjoyed included her shopping trips to Wal-Mart, knitting, crocheting, Dr. Pepper, Chex Mix, watching hummingbirds and attending live sporting events. The Tonkawa Buccaneers, N.O.C. Mavericks, and the Oklahoma City "Thunders" were her favorite teams to support. She attended as many of the local sporting events for Tonkawa as she was able, always having a great time. As well, she adored her rescue dogs, with her pup Missy providing her faithful companionship over the last few years. Ellen has been a member of the Red Hat Society, and a longtime member of the Christian Church in Tonkawa.